How the Jewish Media Spins News

The controlled Media in this country, in concert with the current administration, are so anti-white that they will try to portray Zimmerman as anything other than what he really is, then portray the Negro Martin as a poor, oppessed "black yout". 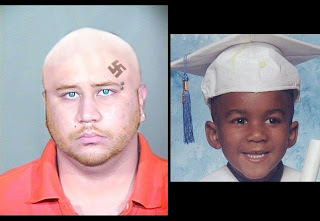 This is replayed in Media Outlets all over the country, every day.  Still think we have a free press?
Posted by Orion at 2:59 PM 4 comments: Links to this post

Marine's medals stolen on a trip to the Arch

David Tucker, owner of All About Love Christian Books and Gifts in Wentzville, is offering the reward for the return of the items, "no questions asked."
"He was fighting for the freedom of the very person who stole his items," said Tucker, 46, an Army veteran himself, said in an interview Saturday night.
No, Sorry Mr. Tucker. He wasn't fighting for anyone's freedom. He was fighting for Empire, an Empire that is the deadliest enemy the White Race has ever faced.  Now the preferred citizens of that Empire are striking back, taking what is theirs.

Read more:
Posted by Orion at 9:26 AM No comments: Links to this post