Time to lighten up a bit.  After all, it's Valentines Day, a day to give all your gurlfriens loves and kisses and everything nice!  It was a great Madi Gras.  Mostly White, civilized humans just having fun on a chilly Febuary day.  No negros made this possible.  Imagine what this would be like if it where a "black" Madi Gras, like in NOLA?
ST. LOUIS — Love and beads were in the air Saturday as St. Louis' 31st Mardi Gras parade snaked through downtown and continued into an all-day party in historic Soulard.

"Repeat after me: With this ring, I do thee wed," said WIL 92.3 personality Cornbread, who got his wedding-officiant license from the Internet, according the station's promotions director, Crystal Miles. 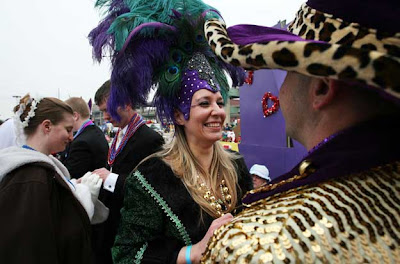 The romance got rolling early as 25 couples got married on a radio station's float moments before the River City Casino Grand Parade stepped off just south of Busch Stadium. MORE

Despite some mischief, most Mardi Gras attendees were full of peaceful smiles and cheers. It's the reason Dawn Niermann of Clayton said she keeps coming back year after year.


"It's just fun to hang out and be in this upbeat atmosphere with everyone," Niermann said. "Every other day, people want to be negative and find something to be upset about, but look around this place. It's ridiculous how happy everyone is." 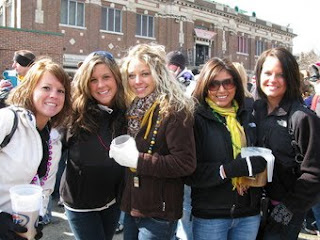 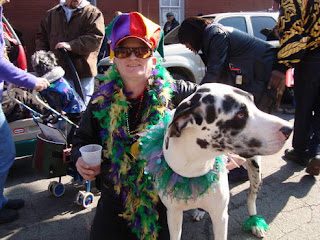 Even Fido was having a blast!
Posted by Orion at 1:48 AM

Where are you in these pics?

Honestly, I didn't take any pics, I got those from the newspaper. I went by there and checked out the party at Soulard but left after a while since I'm not really a party guy, but I would have liked to have been in the middle of those gurlfriens :)

How could I forsake a bruder? Come! Let us cover them with hugs and kisses 'cause white women need them everyday, even when they've been bad, the little precious ones!

Everytime my kid comes over I sqeeeze her so tight and give her hugs and kisses until shes yelling STOP! :) Says I'm weird, go figure. But she loves me cause she fixes deal ole Dad enough home cooked meals to last a week until she's over again, then cleans the house and makes it smell reeeel good. What a girl! Mmmmm whaaaa!

She's a good ol' girl watching out for Pop. Us old salts must be good for something !

See? Good thing we had 'em when we were young. I'm already getting assisted living and I still got a long way to go until the nursing home (If I make it :)

I have two girl fridays actually. One comes and cleans and the other cooks and does my finances. Of course, they want cash monies. As the song goes, They work hard for they money! haha!