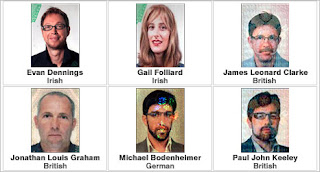 Well, not really. I mean, are you that good of an assassin if your pic is plastered all over the news worldwide? Regardless, there are many interesting things we can pick up from the Jews. They would have got this guy regardless of his security arrangements. Remember that. ANYONE can be gotten to. Anyone.

There is this mistaken belief within the movement that to change things you have to take on the Army, Navy, Coast Guard and Marines. Not to mention the secret police forces. Of course, contact with these elements will be unavoidable, but that's not what resistance is about at all. This is how you punish your enemies and effect change in a resistance movement.

Mr Mabhouh was murdered in a Dubai hotel room, police say
Passports belonging to the alleged killers of a top Hamas official in Dubai are fraudulent, the British and Irish governments have said. Ireland said the names and passport numbers of three suspects did not match anything issued by its officials.

Arrest warrants were issued for the suspects named by police in Dubai, where Mahmoud al-Mabhouh was murdered in a hotel room on 20 January.

One man with the same name as a British suspect said it was not him.

Melvyn Adam Mildiner, a British man living in Israel, told Reuters news agency: "I am obviously angry, upset and scared - any number of things. And I'm looking into what I can do to try to sort things out and clear my name.

"I don't know how this happened or who chose my name or why, but hopefully we'll find out soon."

He added that he had his passport with him.

Lifted a passport and copied it. Or else it was "loaned".

Two Palestinian suspects were being questioned about the murder. Police said they had "fled to Jordan" after the killing, without releasing their names.

Getting traitors to betray their own.

The suspects allegedly trailed Mr Mabhouh when he arrived in Dubai from Syria, paid for everything in cash and used various mobile phones.

Now, if this was a White Resistance hit squad, how would it be different? First, they would have tats all over themselves in plain view, would use their own or some obvious stolen ID, and pay for everything with their debit card. They would use throwaway phones, but would pay for them with their bank accounts.

See the difference?
Posted by Bloody Bill Anderson at 4:32 PM

An outrage, Thermo! Grab yo guns, we are going cold calling! Notice not one person said anything about that racemixing crap being wrong. Pathetic.

The world is a better place when people stick with their OWN KIND.