We be Shedrick and Leo. We be robbin banks and shite, 'cause we hear'ed the gubmint be shutting down so they won't be no poleece to shoots us. Daaaayem we wrong! 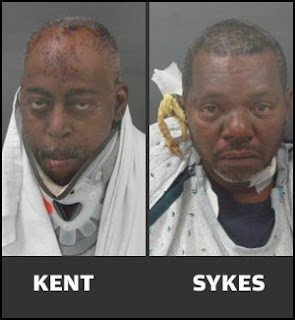 ST. LOUIS • This weekend, police released mug shots of two men who authorities say robbed a bank Thursday using a grenade and led police on a chase through St. Louis that ended in a shootout.

Dayem Shedrick, where you get them hand grenades?!

Both were released from the hospital by Friday morning after the shootout Thursday morning.

Kent was hit twice in the head in the shootout. He was also hit in the wrist and ankle. Sykes was hit in the hand, buttocks and ankle. His ear was also grazed by a bullet.

Haha, shot in the head twice. Must have been using a 9mm. Nothing less than a .45 will do when shooting silverbacks.

Rest of this hilarious story here...


Shame, two more African Scientists taken from us, thanks to the evil white oppressors!
Posted by Orion at 7:50 PM

His shirt reads: "I hear voices in my head, but they speak RUSSIAN".

"Shame, two more African Scientists taken from us, thanks to the evil white oppressors!"
HAHAHAHAHA! Now that is funny!