But one baby Momma don't be liking that her chile suspended for laughing and shiite.

Several students have been suspended for cheering on the attacks or laughing as they took place. Tabasha Holloman, the mother of one of those students, said her son was in the wrong but questioned whether the district was imposing punishments fairly.

"That's the way teenagers react to fights," she said. 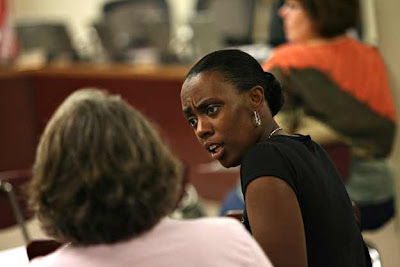 Typical negro reaction. No wonder their "community" is in shambles. Do you think a white parent would have said such a thing? I know my parents would have said the punishment didn't go far enough.

You cannot have diversity and civilization.
Posted by Orion at 5:37 PM

Well,I don't know what my parents would have had to say about cheering on a fight but I KNOW that my father would have whipped me good if I had let anyone, (let alone some bush nigger), put a ass kicking on me like that without at least putting up a fight. I was whipped at home for starting them and I was whipped,(once) for not finishing one. There was definitely a code of conduct observed around the house concerning that.
Dear Dad was an old school, get-things-done kinda guy. When I asked him what to do about the bully who was a year older and 20 lbs heavier, he told me to pick up a brick and crack his head open!I didn't have to use the brick but it was nice to know Dad was there to back me up on my actions, if it became necessary.
Of course, that was before the average American white male was deprived of his testicles by a society gone rotten.
Maybe more parents should quit worrying about their kids playing by politically correct rules; and start worrying about backing them up in their own struggle for survival, in the jungle of America's integrated schools.

Ha, ha, the opening comments are hilarious. Her kid only got suspended and she's complaining? I agree that teenagers act that way but maybe getting in trouble will discourage other kids from acting in the same manner. Do I think a white parent would react the same way? Yes, some would.

Do I think a white parent would react the same way? Yes, some would.

Absolutely, Lormarie. Just another signpost on the road to decline and eventual collapse.

What pathetic "parenting". You could justify any abhorrent behavior using this sheboon's logic: "dats jus whut keeids do. Dey rapes, robs and keeills, but dey dont meens nuffin by it no howz. U singalin out muh baybee!!!"

Anonymous, your dad sounds like my Old Man. My choice was either I fought the bully or I fought him. Between the ultimatum of that rock and hard place, the bully never had a chance.

These feminized White kids today, with all of this PC bullshit pumped into their mushy skulls are not going to survive. I think that's actually the plan.

If you let a dog shit and piss where it pleases and impose no discipline, you get a house full of shit and piss. Same logic applies to the feral nigger savage. We've allowed these burdensome beasts free reign and absolution from responsibility for their actions, and here we see the only possible outcome; the disintegration of civilization itself.