How it's done in Missouri. 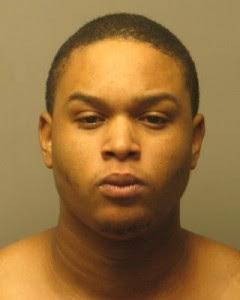 Evan Hassan Wormley walks into the Ameristar Casino in St. Charles with his 2-year-old son.

Wormley, 21, of the 4500 block of Evans Avenue in St. Louis is clearly not sober at this point, Piasecki says.

Wormley, toting his son who is wearing only a soiled diaper, walks over to a set of elevators and shakes down a man in his 70s and his daughter for money.

Wormley attacks the man and pushes him into a wall.

In the process, Piasecki says, Wormley drops his son onto an industrial sized floor sweeping machine sitting in the lobby.

So a drunk negro from St. Louis gets the urge do do some gambling and crosses the river to St. Charles and brings his kid to shake down some white folks.

You can't make this stuff up, folks.

Meanwhile, a member of the chosen from Missouri gets busted in Texas after going on a murder spree.

King pleaded guilty to killing Brian Conrad, 31, Michell Conrad, 35 , and Zach Doan, her 14-year-old son. They were found slain in their remote farmhouse south of Pampa the morning of Sept. 30, 2005. The woman was six months pregnant.

Her 10-year-old daughter survived and called 911.

Last year, King pleaded guilty in the shooting deaths of two people from rural Missouri: Orlie McCool, 70, and his 47-year-old daughter-in-law, Dawn McCool. Their bodies were found by a relative in a rural Pineville, Mo., home on Sept. 30, 2005 - the same day authorities in the Texas Panhandle discovered the bodies in the Conrads' home.

Rest of the story here.
Posted by Orion at 5:12 PM

So does the the murdering jew get bail? Does he already have a airline ticket with his name on it to IsraLIE? Or will he be incarcerated and surprise surprise commit 'sucide' like fellow cretin Irv Rubin or become terminally ill like Madoff, but in reality sitting on his fat jewish ass in Tel Aviv?

They'll probably fry him Kosher style in Texas. They don't mess around there :)

Yeah, I figured you musta been on the road crew, or on the rock pile making little ones outa bigguns ... with LFD bringing ya Pepsi's 'n cigarettes ! Hope all is fine 'n dandy.

Sheeeit, I thought that Nigger with the soiled diaper was a she ape.

It's good to know you are okay! You were missed!

Awww, you bring the Joy down in my heart! :)

BJB, nigga, you better get out here so we can go into one of those casinos and find us some Wormleys!