The Traitors Among Us

As Turner took to his radio show and blog to say that those who opposed his extremist views deserve to die, he received thousands of dollars from the FBI to report on such groups as the Aryan Nations and the white supremacist National Alliance, and even a member of the Blue Eyed Devils skinhead punk band. Later, he was sent undercover to Brazil where he reported a plot to send non-military supplies to anti-American Iraqi resistance fighters. Sometimes he signed "Valhalla" on his FBI payment receipts instead of his own name.

His dual life of shock jock and informant offers a window into the murky realm of domestic intelligence in the years after the Sept. 11 terror attacks — in particular, the difficult choices for the FBI in penetrating controversial fringe groups with equally controversial informants.


Below is the face of a traitor. In his possession is a .22 caliber silencer. 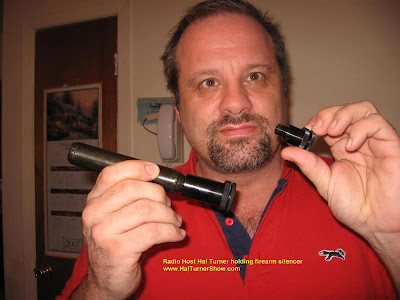 First off, anyone that looks like that should be suspect right off the bat. Second, anyone that is holding up something that is illegal to buy or possess in the State of New Jersy regardless of ATF regs and does so publicly is a Fed. No ifs, ands or buts. Turner thought he could break laws with impunity just like his employer, the FBI. For the most part, he got away with it. Apparently, after his email was hacked the Feds cut him loose, but he's one of those guys you just can't fire.

People should have seen red flags flying all over the place with this guy, but the refused. Even after it was revealed that he had been working for the government, which many of us were almost certain but couldn't prove, his diehard followers couldn't see the light. And now, about 100 of them from what I can gather aren't going to see any light for a long time. Worse, he screwed up an operation to get supplies to the freedom fighters in Iraq through Brazil.

Listen, I know most of us out there want to do something. We ache for it. We want to grind our enemies into the dirt and throw the rest into the everlasting fire of hell. I know if we could get just TEN MEN in two man squads with sniper rifles equipped with a short list of high value targets, we could get something going. And somewhere out there, there's more than ten men who know what to do and how to do it. Following someone like Hal Turner though, is not the way to go. What Hal did basically, is take some motivated patriots and throw them to the Greatest of all Satans. This has to stop.

I ask all Patriots and future insurgents to be careful. Anyone that comes up to you and talks big and says he has weapons or helicopters (as in my case) and seems generally out of place, don't bite. If anyone you barely know and haven't checked out says he has some high quality machine guns you can have, stay away. You'll notice them. I've been tested in San Fran and here in Missouri already but I ain't some hothead (as much as I seem like it) that will jump at anything. Trust your senses, not who you are dealing with.

Here is a Fed right in the middle of a WP gathering.  Good detective work exposed him.  Look at how out of place this guy looks compared to the others.


If you do find some patriots you think you can work with or join up with that are ready to take action, make sure you have checked them out throughly first. Civil records, criminal records, credit records. If anything seems fishy, call some of the companies on the credit report and ask about the person's account number, when he opened it, who opened it. Stuff like that.

Even then, the person may not be a undercover cop but a "good citizen" working for the cops. Then you would have to either put bugs in their house (very easy to do) or a keylogger on their computer. Insurgency is serious business and if you think these measures are "too extreme", or you don't want to strip down or be stripped down for wires, then I suggest you just keep it at home and watch the news.

Never trust, always verify, and constantly monitor. It can be done. We are Aryans.
Posted by Orion at 10:27 PM

[Below, "Hal Turner: Publican" essay, by Apollonian, is posted on WhiteReference.blogspot.com, as noted. What then to say in response to latest gutter-sniping fm the feministic white nigger, "orion" at Access St. Louis?]

First, the little bastard punk, "orion," GIVES NO SUBSTANTIATION for his specific assertions against Hal Turner upon which all other conclusion must necessarily be based. Scummy little bastard KNOWS NOT EVEN THE FIRST THING ABOUT WHICH HE PRETENDS TO BE TALKING.

Ignorant little bastard ("orion") says: "What Hal did basically, is take some motivated patriots and throw them to the Greatest of all Satans."

Little bastard-punk ("orion") says, "...about 100 of them from what I can gather aren't going to see any light for a long time." But again, little bastard-punk gives no substantiation, no citations, or references of any sort whatsoever.

And gee, but isn't it sooooo touching the little bastard son-of-a-bitch feminine mentality ("orion") tells us, "[l]isten, I know most of us out there want to do something." SPEAK FOR URSELF, WHITE-NIGGER SCUM.

For the ONLY thing that can be done is to INFORM THE PEOPLE, THAT'S ALL. And things informational must begin at the very beginning, this meaning then beginning w. that basic Christian foundation and philosophy--something that's far beyond the ken of a feministic little punk who just wants to play "Army," and who consorts (on his blog) with literal niggers ("LorMarie") and outright Jews (the "Mad Jewess").

U know, "orion," u incredibly stupid little bastard, If u were really smart, with even half a brain, u'd shut-up and shut-down ur so-called "blog," brainless little feminized punk-moron--but of course, reality is such that we know things must be different--u're good example of how not-to-be and -do.

I swear to God, but u ("orion") are absolutely amazing for ur stupidity--U COULDN'T BE FULL-BLOODED ARYAN--it's just not possible. And I note the sort of people u consort with, like "Jeff" the hick Pharisee with all the Biblic citations, and "Joy," the little latter-day "Israelite" whore for God. U people are most excellent, even comic, examples of how not-to-be, and what not-to-do, truly entertaining. U're bound for death--AND U FULLY DESERVE IT. And anyone else who takes u seriously deserves death too. Honest elections and death to the Fed. Apollonian

I let this one through so you could see the mind of a fool. This is exactly what I'm talking about. Avoid people like this like the plague.

Thanks, Apollonut. I knew you were good for something.

This(apoo's bowel movement) speaks volumes about both Hal Turner and the nut bars still defending him.

I note that I've been dishonored by not being counted among those scorned folks who have been mentioned by name. Perhaps next time.

Check White Reference, RM. It's the only blog he can get on and I'm sure he'll have something to say about about you.

It's amazing, isn't it? I find it fascinating how people will hold on to something no matter what. There's a name for the phenomenon but it escapes me.

Ahhh ... the sewer sludge from San Antone' has surfaced once again to grace us with the wealth of knowledge that he alone can expound upon. NOT ! Epic fail.

I've seen Alpo getting 'round a couple of the blogs that are more intense in Christian beliefs but it's evident one cannot shine up a piece of shit no matter how much elbow grease you put into it.

Although White Reference seems swamped in the delusion of political reform, I use to like going there for a post now and again, but this here mutant slimes up every venue he approaches.

I'm not going to start the internet tuff guy act with you peon ... but your slander of a good Christian sister is going to get you a beat down with a chain one day.

Poor neglected Alpo - bunch of tinker toys 'n crayons and nobody to play with !
It's a cruel world indeed.

Good to see you got another case of .30 caliber air freshner in - was gonna offer ya some if you were out.

I allowed him one bowel movement also to prove to him it indeed stinks and now he's running back to his sanctuary in the northwest to tattle 'n whine ... as soon as he attends his court sanctioned Asshole's Anonymous meeting.

3 strikes and it's back to the loony farm.

The challenge facing the White race, is not fighting the government, but to regain control of the social environment in which White people live.
Providing jobs, housing and business opportunities for White people is what it's all about. Finance is the high ground in business, which must be captured.

A new all-White society must be created under the nose of the old order.

Apollonian is a stupid twit and ignorant abuse like that is nothing to be bothered about!