Now that the first decade of the second millenium is behind us, it might do us some good to take stock and look at what's ahead in the next decade. This one will be critical for White Nationalists and other racialists, because we are fast approaching the point of no return.

In 13 years, school age children of European descent will be a minority within the system. This is already the case in California and Nevada, where the third world invaders are having more children at a faster pace than the White population, thanks in large part to the generosity of your government, the deadliest enemy the white race has ever faced in history.

The ethnic shifts in school enrollment are most evident in the American West. States such as Arizona, California and Nevada are seeing an influx of Hispanics due to both immigration and higher birth rates than other ethnic groups.

In 2007, more than 40 percent of all students in K-12 were minorities - Hispanics, blacks, Asian-Americans and others. That is double the percentage of three decades ago.

"The future of our education system depends on how we can advance Hispanics through the ranks," said William Frey, a demographer at the Brookings Institution in Washington.

Minorities are projected to become the majority of the overall U.S. population by 2042. For minority children, that shift is seen coming in 2023, seven years earlier than was estimated as recently as 2004. The accelerated timetable is due to immigration among Hispanics and Asians, and declining birth rates among non-Hispanic whites.

It gets worse. Remember when the deadliest enemy the white race has ever faced, the US Goverment, was projecting that Whites would be a minority in 2050? If you check out the Population Map link at the top of my blog, you'll see the figures projected out to 2090. Well, it seems we are on track to become a Brazilian superstate in the year 2042 now. After that, it will look like this.  Guess what the Black represents in the chart. 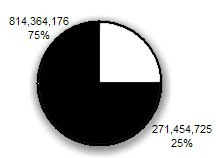 Almost a billion NON-WHITE inhabitants of North America.  Think about that for a second.  We will have come full circle, when we were a minority during the first 100 years or so of our landing on this continent.  Only this time, there will be no white migration to reverse the trend.  We will be the next South Africa, with nowhere to go.

Here's a map of our CURRENT situation. (Thanks to AW for the link).

See the color second from the bottom in the color chart? That's us.

Is it bad enough yet? Wait until the Greatest of All Satans confers "citizenship" to 20 million racial aliens already here. Then the real disaster will begin.

Now, I know and most people who are concerned about our situation know what all this means for us. I don't need to go into it at this point. It's a given. What we need to be discussing is how to reverse it.

I feel this year marks a turning point in awareness of our people. I think more people of European descent are starting to wake up to the disaster that has befallen us. And that's a start. But more needs to happen, because time is not on our side.

I've always been a proponent of the multi-faceted approach to our problem. In every revolution, in every societal change, there has been the moderate positon and the extreme position. There are the writers and thinkers, and there are the movers and shakers.

There is always time for talk, for discussion, for reason. However, this is no longer good enough, nor will it by itself get us anywhere. This struggle for our survival demands that armed resistance to our enemies become a viable option. Talk is useless without something to back it up. Even Africans understand this simple axiom.  We have tried for decades to avoid what is coming, but it's no longer avoidable.  It is inevitable.

Now I'm not talking about taking on the Great Satan's military might, or acts of sensless violence like shooting up a synogogue, or popping a common street nigger. Violence for the sake of violence works against us, and should be avoided. Organized resistance should have a purpose, and should be a tactic used in conjunction with our other methods in furtherance of our ultimate goal: A White Ethnostate, free from alien influences.

Nor am I saying that anyone should go out and start shooting up our enemies now.  What I am saying is that we need to start thinking about the unthinkable.  We need to start preparing ourselves, both mentally and physically, for what is coming in the next decade.

The situation may be critical, but it's not yet hopeless. Let's ensure it doesn't get that way.
Posted by Orion at 9:01 PM

Right on as usual brother. We all see it happening, unbelievable as it may seem, that these evil and insidious beings have completely hijacked and occupied our government right in front of our faces! Isn't it obvious how the hooknoses smirk and blatantly mock us now on jew tv with all their lies?

Damn it, how did we let this happen? They brainwashed most of us with their tv garbage disinformation theater news they pump out, added to the total lies they program our children with and call it education. Time to break the cycle.

Now these blatant evil jew racists are going all out to scrub news archives on the internet to hide obongo's african birth. Check this out- VERY QUIETLY OBONGO'S CITIZENSHIP REACHES THE SUPREME COURT: (cached because original isn't working today on teapartypatriots.org) http://74.125.93.132/search?q=cache:4tdQGEX1fRgJ:www.teapartypatriots.org/BlogPostView.aspx%3Fid%3D3dcf326b-1ec1-4f65-b9c8-1bc87dbecb1f+very+quietly+obama%27s+citizenship+case+reaches&cd=1&hl=en&ct=clnk&gl=us

Do you think obongo spent $900,000 dollars of his campaign money to hire superlawyers around the world to hide his birth, college, and passport records for no reason? hehe We will get hit with something soon before it is allowed to come out that obongo IS NOT PRESIDENT, is a treasonous traitor implanted by the jews, and all the illegal unconstitutional bullshit that puppet created with his executive kike orders, kike congress and kike czars (including the pedophile kike faggot he appointed to direct our childrens 'education' in this country) is null and void. That nigger is gonna pay...

COME ON PEOPLE THIS IS OUR COUNTRY. LET'S TAKE IT BACK!
STAND UP WHEN THE TIME IS RIGHT.

Once a person has been educated to the truth about our culture, media, and government, and just how deeply ZOG has infiltrated every aspect of our lives, it's impossible to turn on the TV, see a movie, read a book or newspaper without instantly seeing the blatant propaganda and psychological bombardment Americans are subjected to on a daily basis.

It's astounding to see just how pervasive it really is. But most people literally don't have a clue to what's right in front of them. It's terrifying. And all the while, Jewish organizations like the ADL, the SPLC, and the JDL are actively villainizing white Americans and anyone else that dares to expose this evil. I can't remember the last time I saw a show or documentary that didn't portray white activists as foaming at the mouth, half-insane hate mongers, with no justifiable reason for their anger other than "racism," that tired old dodge..."

Orion, you need to have a post- FIRE NAPOLITANO.
this b*tch is going to grant illegals amnesty.
We all have to say the same message:
FIRE NAPOLITANO.
This sleazoid fat witch has 2 assistants that are BOTH MUSLIMS.
SHE NEEDS TO BE FIRED.

That's a very eye-opening video, AW. All the West is under siege. We need to start lifting it, and soon.

Thermo, I don't think she will ever be fired. Even if they did, she would be replaced by someone just as bad. And if anyone thinks electing the other party will be any better, they haven't been paying attention.

Yes, there are whites that live in latin America.  I find it interesting that they have non-hispanic asian/black/white and other.  I guess they mean hispanic is a squat mestizo?