Lightning and the Sun 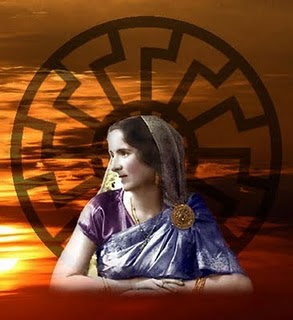 "Age after age, when justice is cushed, when evil reigns supreme, I come; again am I born on Earth to save the world."

I've added Lightning And The Sun by Savitri Devi to our White Nationalist Reading Library. I haven't read it in a while but somehow, I feel it's time to read it again at this stage of cyclic history. Here's a quick synopsis of the book from our friend at Aryan Myth and Metahistory:

"...she was one of the first to realise that Adolf Hitler was more than just a politician, statesman or war leader but an Aryan Avatar. Within His person He combined the elements of the Hindu Vishnu[Preserver] and Shiva[Destroyer] Avatars, the presager of the final Kalki Avatar who will bring the Kali Yuga to a close. Miguel Serrano developed this concept further in later years.
This theory was explored in her 1958 published work The Lightning and the Sun in which she wrote about the impact of Ahknaton[a Man Above Time], Genghis Khan[a Man in Time] and Adolf Hitler[a Man Against Time]. The work was dedicated to Adolf Hitler: "To the god-like Individual of our times; the Man against Time; the greatest European of all times; both Sun and Lightning: Adolf Hitler".

I'm not sure why but I just have the calling to put this up for others to read, in order to understand the massive struggle past and the struggle ahead. We hope you enjoy it.
Posted by Bloody Bill Anderson at 10:23 PM