Call of the Blood - Part V

Negros, and other non-whites in general, have no regard for animals. You won't see Asians, Indians or Arabs showing outrage at animal cruelty, as a rule. Negros however, take the prize in utter disregard for animals and any life in general.

MONROE COUNTY, GA (CBS ATLANTA) - Bond has been set for a Forsyth man who allegedly almost decapitated his mixed-breed dog. As of Saturday afternoon, he was still in jail.

19-year-old, Monterion Dionte Davis, made his first appearance Friday morning and has a $15,000 bond. He cannot be see with animals, according to Judge Davis, with Monroe County Magistrate Court.

Law enforcement officials called this the worst animal abuse case they have ever seen in Forsyth.

A spokesperson with the Monroe County Sheriff's Office said Davis was arrested Thursday after a member of the animal advocacy group Save-A-Pet found out about his severely injured dog.

Shane Smith was that member. He said he was at the pound when he saw the dog. The pup walked up to him and he saw her throat was severed. Smith rushed the dog to Dr. Butler Caldwell at the Caldwell Veterinary Hospital who is amazed she is alive.

"Most of the musculature up here was severed, the trachea was severed," said Dr. Caldwell. "Fortunately, the major arteries were not severed or the esophagus."

Dr. Caldwell performed the emergency surgery and is overseeing the dog's recovery.

Smith has named the dog Hope. 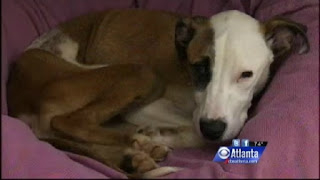 This is the nigger that tied him to a tree because he wanted it to die. 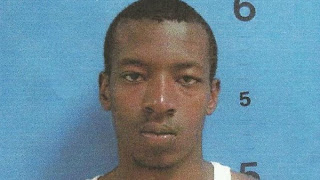 This is how they found the dog.  I'm not going to post the photo because it's too horrible to look at, but if you want to see it, you can find it here .  Please don't view it if you have a weak stomach.

Now, some will say, "so what"?  Whites do this too!  And yes, there are dysgenic whites that are just as cruel.  But we're going to show you video that makes our point about niggers being without soul.

This is from Kenya.  A couple of hungry Africans stole a few potatoes.  This is what Monterion Dionte's DNA hears.  It may be hard, but I urge you to watch and see the utter depravity of the negro soul.  It is something totally alien to us.  Turn it up for better effect.

In every African, no matter where it resides, Mother Africa calls from deep within the DNA.  Remember that when you are around them.  It might just save your life.
Posted by Orion at 8:24 PM