What Must Come to Pass

Every year is getting shorter never seem to find the time.
Plans that either come to naught or half a page of scribbled lines
Hanging on in quiet desperation is the English way
The time is gone, the song is over,
Thought I'd something more to say.

What I'm about to say may shock some.  Conservatives, Reformers, Flag-wavers, and  reactionaries will not understand.  Therefore, this is to the revolutionaries among us, those that have eyes to see and ears to hear.

The great cosmic cycle; birth, growth, decline, death, rebirth must happen to all things  Sometimes death does not come quietly in the night.  When a society embarks upon a path to destruction, violence is the logical conclusion to it's end.

The English people, after destroying the only hope for Europe in the great war to kill White People, collectively decided to follow such a path.  No one is innocent.  Even Enoch Powell, whose prophetic speech about rivers of blood in 1968, favored the importation of Black nurses into the UK in 1960.

The riots and disorder currently raging in England cannot be permitted to stop.  It must escalate into a full blown insurgency.  Muslims in the UK must take this opportunity to declare their own government in England, declaring everything from Birmingham to the Ise of Wright to be a new Islamic State.  We urge Iran, Syria, Libya and other states to commence air strikes on London proper to destroy the greatest enemy the White Race has ever faced in the Motherland.

Why do we do advocate this?  Because we want to prevent this: 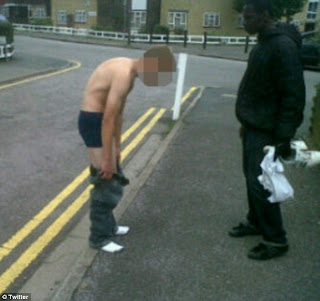 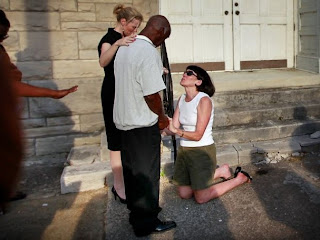 from ever happening in the White Imperium to come.  And in order to stop this, the old Order must be swept away.  If we do not, then the negationists, the alienists, the multicult exterminationists will have won.  This cannot happen.  Therefore, we must have more strife, more violence, more despair, more sorrow.

For those of us in the heart of the Great Satan, the best is saved for last.  Rivers of blood may flow in Jolly Ole England, but there will be an ocean of blood knee deep to wade though in the land formally known as the United States and Canada.

Your time in America is soon coming to a close, Traitors!! 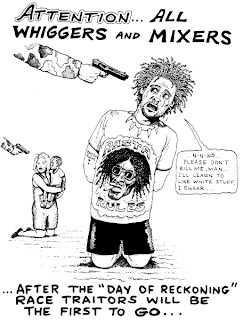