There goes da white mans, always trying to keep black folk from succeeding. What's interesting about this story is how CPS knew this woman was not caring for her children but still gave her a pass. They didn't want to seem racist. You see, egalitarian liberals are really the racist haters.

St. Louis County woman held in murder of own child 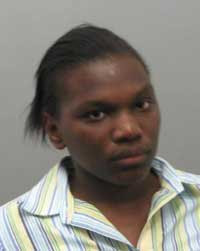 CLAYTON -- St. Louis County police today announced that a 20-year-old woman has been charged in the murder of her infant last year.

Prosecutors on May 14 charged Sharnique Jones, of the 3800 block of Salome in North St. Louis County, with second-degree murder, two counts of first-degree endangering the welfare of a child and first-degree assault. Jones is being held on a $250,000 cash-only bond, police said.

Jones was charged with the "intentional suffocation of her 3-month-old infant," who died on April 7, 2008, police said. Prosecutors allege that she suffocated the child after Jones had withheld food from the baby, police said.

Healthcare providers and social workers "had repeatedly warned Jones about the inadequate care she had been giving the infant," St. Louis County police said today.

Then, on Jan. 26, Jones gave birth to a second baby, police said, and then tried to suffocate that child. In addition, social workers and healthcare providers, again, told Jones that she was not providing adequate nutrition.

After the second time Jones allegedly tried to kill her child, police and prosecutors reviewed the first baby's death last year and it was ruled a homicide, police said.

Police would not release the babies' identities.
Posted by Orion at 10:58 PM

Day after day, time after time, I am continually amazed that there is not much more negro crime in our country due to the negroes penchant for doling out senseless names.

Do they have a wheel with a bunch of stupid names on it? What happened to names like Rodney, Russel, Leroy, Anthony (pronounced Ant-knee)?

Thank goodness I don't have to live around those knuckleheads anymore. I feel bad for those of you in St. Louis...must stink something awlful.

What about Rufus? that actually used to be a good Irish name, until the negros be stolin' it and shite.

I hear ya about St. Louis, but at least it isn't California. Anything is better than that cesspool. There are actually White people out here in STL, which can't be said for CA anymore.