Why They're Called The Enemy Media

The enemy media in this country went ballistic recently over a Mexican Invader in Schuylkill County, PA, who, because some White MEN decided to take charge and defend their town, sent the invader back to Mexico in a cardboard box. They posted pictures of the poor dear and wrote about the injustice he had suffered at the hands of evil white devils.

Well, we know now that this innocent little turd worlder was the vanguard of a drug and crime gang that if allowed to fester, would have turned the county into a living hell.

I know, I used to live in California and I saw this type of thing with my own eyes. Of course, anyone reading this that lives around a large Mexican population knows what I'm talking about. Even the blacks in LA know what I'm talking about, as they are being ethnically cleansed from areas such as Compton.

And of course, If you hear anything about South Africa and Zimbabwe, it's all about how wonderful it is but we still need to help the poor poor african as years of oppression has left him unable to even maintain a civilization. Right?

But what about the pictures and photos of Whites who have fallen victim to our Mexican immigrants who so enrich our daily lives? Where are they? Have you ever read a story about them in the same way the enemy media wrote about their darling turder?

What about Amanda Thomas and Patrick Epley in Southern Missouri? 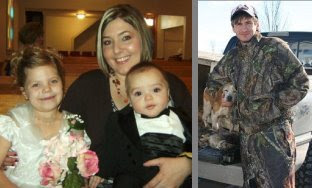 Manuel Cazares admitted after his arrest that he is an illegal immigrant from the Mexican state of Michoacan. The 32-year-old had several run-ins with law enforcement before the homicides, but officials had never questioned his legal status.

Now he is charged with two counts of second-degree murder and armed criminal action in the Feb. 28 deaths of his ex-girlfriend, 27-year-old Amanda Thomas, and 25-year-old Carl Patrick Epley.

What, no pics of them in the morgue, or of the murder scene? Maybe it looked like this: 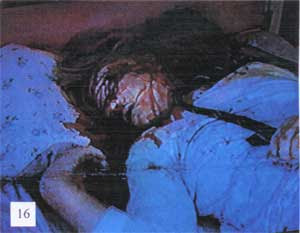 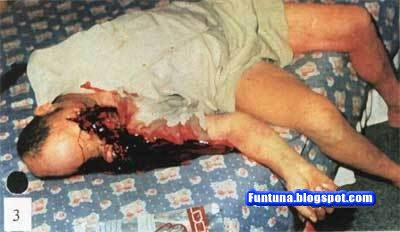 Where's all the sobbing and gnashing of teeth for these victims?

Two Wright City men have been charged with sex crimes against teenage girls. Benito Sanchez-Castro, 23, of the 16000 block of Country Cove Lane, and Jose Toledo-Perez, 24, of the 18000 block of St.

I guess we can't see the teenage girls who are scarred for life, but maybe they looked like this?

Let's travel out to California and check out some more wonderful Mexishit diversity, just doing the jobs Americans won't do, right? 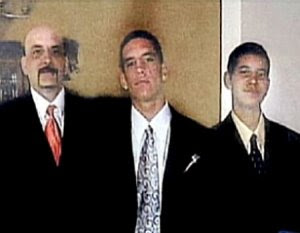 Bologna Family members gunned down in the Streets of Sanctuary Francisco

Edwin Ramos is accused of gunning down Anthony Bologna, and his sons, 20-year-old Michael, and 16-year-old Matthew, with an AK47 assault weapon after they blocked his ability to turn.

Ramos' attorney maintains his client was not the shooter and police have nabbed the wrong person.

But the case has sparked debate over a San Francisco law that shields illegal immigrants from being deported and put pressure on District Attorney Kamala Harris to seek the death penalty against Ramos.

The 21-year-old is an illegal immigrant who has avoided deportation despite previous brushes with the law.

Just another local story that plays itself out everyday in beautiful, diverse California. But no pics of the murder scene or they in the morgue...Maybe they looked like this after being shot with an AK?

Now, let's zoom back to the East Coast, where more Mexican diversity awaits us. This one is in Connecticut, home of the tolerant Yankee and his Jewish buddies from New York.

HAMDEN--A town woman, 25, survived a vicious attack by a co-worker who allegedly tried to snap her neck, stomped on her chest, raped her and left her for dead early Friday in East Rock Park, police said.

After the man drove off in her car, the severely beaten woman made her way from the park, down a hill through grass and branches, to a house on Ridge Road, and frantically rang a doorbell.

A resident who had been sleeping on the couch on the first floor heard a commotion and opened the door to a horrifying sight.

"The girl's eyes were completely closed and blood was all over her face. It was like something out of a horror movie," he said. "She was saying 'Help me, help me, please help me.'"

That's the first story. Boy, when it's a mexishit committing the crimes, the enemy media try their best to cover up facts. But wait! We have another story on the same incident!

The vicious attacked continued as the suspect, identified by police as an illegal immigrant, forced the victim back inside the car and drove to the northern section of East Rock Park in Hamden.

Unbelievably, this woman's terrifying night would continue. She told officers she begged for her life as her coworker raped and beat her again along a deserted pathway in the park. "He then attempted to snap her neck," added Captain Smith. "He stomped on her with his feet on her chest."

Finally, the attacker took off, apparently because he thought his victim was dead. She laid there quietly, without moving, until he drove away and she ran to a nearby house for help.

That was about 3:40am, after enduring two incredibly brutal hours.

The name of her alleged attacker has not been released yet, and police believe he may be in CT illegally from Mexico. He's charged with attempted murder, kidnapping, sexual assault and other charges

No pics of her in the hospital? Maybe she looked like this:

Although the culture enhancing Mexican probably tried to make her look like this: 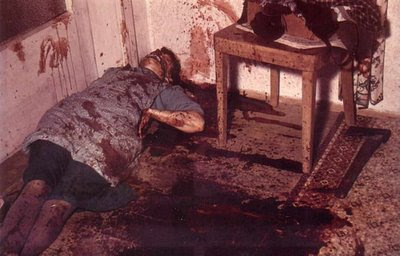 Oh well, hey. It's just somebody's White Mother, big deal. Nothing to see, on with the next story about poor mexicans struggling to make it in our wonderfully diverse country. Who cares?!

We do. We care very much. You multicultural egalitarian cock lovers who think diversity is so great have blood on your hands. Lots of it. From South Africa (where those pictures were taken) To Northern Europe to America and Australia. All over the Western World we are under attack. A low intensity race war is being waged by the hordes of worthless turdworlders against our people. You are responsible for the rivers of blood that is coming and mark my words, WE will be shedding YOUR BLOOD into those rivers.

So next time you whiners come here calling me ignorant or stupid, PREPARE TO BACK IT UP! Call me a racist, call me a hater, those words are meaningless to me. But ignorant I am not. And one day, an Army of White lone wolves and insurgents will correct your ignorance PERMANENTLY.

Valhalla awaits us, the hottest corner of hell awaits you. Bank on it.
Posted by Orion at 10:41 PM

I just cant TAKE this ANYMORE. I WANT THESE FKERS DEAD. DEAD, not breathing- DEAD.

We HAVE to PRAY for DELIVERANCE from God almighty creator of the universe and King of KINGS.

I know ALL TOO WELL what these illegal occupiers do. I slept with a sword and a 22 Gage in FEAR of terror in Cali which was once a gorgeous place.

We may lose it all, BUT, if we recover our Godliness we will have gained this nation that is suppose to be CHRISTIAN.

These photos made me cry HARD this AM. HARD.

A picture is worth a thousand words. You know a year ago I would have vomited seeing those pics. But now they just steel my resolve as I know that this is what is coming for those who won't wake up. No human Aryan could do things like that to people. But our children have a future in jeopardy thanks to these animals and we owe it to ourselves to show them no mercy when the time comes for them to make amends for their evil.

The wrath of the northmen, if it is awakened again, will not make the mistake of permitting our enemies another chance to destroy us. This time it has to be final.

It is a reckless endangerment that such beasts are routinely paroled or eventually released, to again target those usually most defenseless.

"So next time you whiners come here calling me ignorant or stupid, PREPARE TO BACK IT UP! Call me a racist, call me a hater, those words are meaningless to me. But ignorant I am not. And one day, an Army of White lone wolves and insurgents will correct your ignorance PERMANENTLY."

And a few mad Jews that resist the LEFT, the ones that HATE God.

DOWN WITH THE LEFT, DEATH TO THE LEFT. CURSED WRETCHED LEFT, friends of SATAN. JUDGMENT IS HERE. They called down the THUNDER, now they GOT IT.

For if we do NOT hate this EVIL, we would also be turned over to this debauchery run AMOK and murder of our country-men & women.

I AM A RACIST.
Racist AGAINST the ones that HATE Americans that LOVE God and country.

WAR IS HERE, and I smell the blood, and I will sit with the King of Kings as he shows me HIS vengeance over this EVIL, if needs be, authorizing MY hands.

Hooah.
SEMPER FI DO OR DIE.

You tell'em, Mad! Prepare your insurgent gear and report to Cell Alpha One, Sector 5 asap! Don't forget your thermonukes!

Alpha One Sector 5 Region II handles all leftists and bolshies in your area. No quarter is to be given. Make sure your team has some poles and video cameras so we can stick their heads on them and post it on youtube!

You're right, Shalmaneser. No Aryan could do that to innocent people, but guilty people will get far worse than what they've done to ours. Aryan Justice can be hard and brutal.

@anon - it is criminal to set these people amongst us. Any goverment that allows it is illegitimate and must be removed by any means whatsoever!

Mad, I got those pics from googling south african farm murders but there are some websites that have worse than that. I think if you go to in-season out of season on my blog roll you might find a link.

"South Africa Sucks" is a good blog with links -

Also check out "Stop Boer Genocide" ... prepare your mind and stomach for reality though -

Why is this blood bath not front page news ?! Our crime wave is bad but this is way outa control.

Oh, believe you ME, I got gear man. GEAR that will choke an elephant.

"You got a FIGHT comin, its comin TODAY! YOU ALL R GONNA BLEED!"

Amen, amen, AMEN.
The tree of Liberty must be watered from every time to time with the BLOOD of patriots and tyrants.

Our Blood covered by the blood of the greatest man- Jesus- WE ARE COVERED. They are NOT.
They are DOOMED to HELL.

If we dont get em first, let GOD sort their asses out.

PRAISE THE LORD AND PASS THE AMMUNITION!

Horrifying pictures to see, but see we must to truly understand the magnitude of the evil that has surrounded us.

Well said, Joy. To be honest, I really didn't want to post those pics but I'm with you, the time of being polite is over. It's time to start ripping off the Matrix cord and letting people see the results of their misguided stupidity.

We must not end up like South Africa. NEVER!