Well, not quite. The Tea Partier that was attacked in Saint Louis was black, and the gun toter in AZ was Black. This guy says he's a deep thinker, according to his facebook page, and the qawker.com, a liberal mag, caught up with him soon after he threated Obama. Black folks, they funny sometimes! 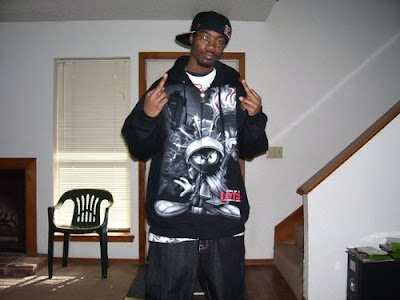 He just don't give a fuck, werd.

Here's one of his tweets.  We are reproducing this only to show what was said.  We here at Access STL do not in any way support or agree with this sentiment.  As we've said before, we think Obama and his jews are the best thing to happen to our movement, and hope he serves out his first term.

Pretty Funny. The controlled media would have you believe that it's just angry white folks that are talking about violence. Nothing could be further from the truth. Conservatives are lame cowards and anyone that makes direct threats does not intend to carry them out.

Rest of the story here.
Posted by Orion at 2:22 PM

WOW! I knew it though.
I knew they would be the first to turn on the "Messiah"

Orion, if you want to know how terrible evil Obama and his "Joos" are, you MUST read the story of one that WAS one of them Joos- HOLY CRAP-I cannot believe this book. McCarthy was right.

None of that would have ever happened if TheMadJewess has been on the scene! Bolshevik jews and their step-n-fetchits would have been thermonuclearized!

I WISH.
You should see what they do to me Orion. Show up @ my door in the middle of the night and ring the door-bell to try to scare the sh*t out of me. I have 3 guns now.
All I have to do is pretend to lure them in, then BOOM, they are dead mens bones and all corruption! LOL

Did you see how I dumped on Waxman the Bolshvik JOO PIG?

Orion, I am going to do ANOTHER story on this kid that tried to kill our dear leader.

Do you want me to link you? I hope you know that it is a risk for you. I have enemies that show up now at my door at night, just from my IP. We are now installing a friggin security system.

Anyway, let me know.
I dont want my troubles to become yours.

I use forums or news sites, but when I use personal blogs, these evil Bolsheviks end up non-stop harassment on friendly blogs, so- please let me know

Send 'em on, Thermo. We's locked and loaded for Bear!