Diversity News From the Lou

First up is West County (St. Louis county is divided into north, east, south and west). West County is where the more afluent live. Now you can't even leave your car in a parking garage anymore.

"I didn't know what to think. I freaked out. I started crying," said victim Katie Hartwig.

She came out from her job at West County Mall to find her Oldsmobile Alero on blocks. Two of the four tires and rims were stolen. The Toyota next to Hartwig's was also on blocks with two of the tires and rims gone. That car also had the gas line damaged. A third car had lug nuts loosened but the tires were not taken.

I've been noticing more niggers in formally white areas of St. Louis and St. Charles county. They are moving them out of North county because they are going to redevelop that area. This actually sounds more like mexicans but negros are known to do this, but in a parking garage??

"I've been here in Des Peres almost 26 years and this is the first time I've seen an incident like this where they've actually jacked the cars up and put cinder blocks underneath the frame and taken the tires and wheels off of them," said Captain Charles Milano with the Des Peres Police Department.

Get used to it, Captain. Hey, at least you'll stay busy, right? Isn't that what all cops want, to keep busy fighting the "bad guys"? No surveillance cameras were installed because there wasn't any need before. Niggers and freedom; like oil and water.

Next is the Central West End in St. Louis city. The city is trying to re-gentrify the area. Good luck. Careful when you are driving in the area, you might catch a stray bullet.

Now we move across town to north 8th street. Niggas trying to shoot daddy, get little girl instead. Grandma yells "hit the floor!". Sounds like a war zone, no? Looks like they were a little late in reporting it though.

Police say the girl was inside a home in the 1400 block of North 8th Street when she was hit. She was found about 12:45 a.m. Tuesday with a small cut on her head.

The shooting actually happened about an hour earlier, police say.

Let's move across the river where negros are more than plentiful. Spotlight on minority customer service from Alton! 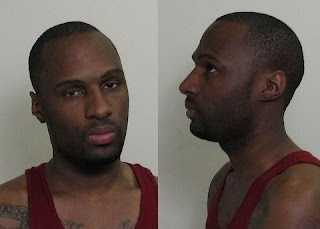 He says they then downloaded that information onto a computer.

"Then you have another device you can load that information onto a blank card...on the back of a Bogus card" said Capt. Wells.

Johnson is in jail charged with Identity theft. Captain Wells says they're still building cases against the other two.

Let's have some comic relief from all the diversity news. We move to southeast Missouri and some white crime. A 23 year old gets mad at his woman and doesn't want to get all messy when he slices her up! This country boy was serious!

JACKSON, Mo. (AP) A southeast Missouri man faces sentencing May 10 after admitting that he wrapped himself in plastic, displayed a knife with his wife's name on it and threatened to kill her.

The Southeast Missourian reported that 23-year-old Joshua Wright of Cape Girardeau pleaded guilty Monday to unlawful use of a weapon and third-degree domestic assault.

Wright's wife told police she arrived home March 9 after a fight with her husband and found him wrapped in trash bags from his neck to his feet. He allegedly told her he didn't want to get blood on himself when he killed her.

Weapons on a coffee table included a knife with his wife's name written on the blade and a second knife with her ex-boyfriend's name on the blade. A broken wooden stick had both names on it.


That's it for now, folks. We're not Detroit yet, but we're trying!Remember, you can have diversity or you can have civilization, but you can't have both.
Posted by Orion at 11:08 PM

Many times I had drive through eastern St.Louis from I 70 heading out west to Kansas City (another shit hole), I would pray the truck would not break down. Usually I would pay the extra for fuel and take the 270 by pass.Down by the brewery it is relatively safe(?) but go a about 1 mile North. Yes it does look like many places in Detroit. Abandoned or destroyed houses and businesses,graffiti, burned out cars, hustling porch monkeys...

I would have to say East St. Louis (the City of) is worse though. I would say to a point the same if not worse then Detroit..

Every place where spooks are the majority gets destroyed

Joy! Where have you been?! Glad you are back!

Cleveland, you're right. East Saint Louis is every bit as bad as Detroit. Like you say, there is no denying that wherever Africans gain the majority (or reach at least 10%) The area is not long for Civilization.

I think what the City of STL is doing to keep from going Detroit is to spread the negros throughout the area and rebuild the blighted areas after they have left. Kinda like shuffling chairs on the Titanic. I guess the folks in the West Central End are finding out that doesn't work.

I iz here Orion! I've done got myself in love so I have been 'occupied'. I got my first golf lesson yesterday and damn if I don't like the game. haha I can't wait to go play again!

Golf ?! How do you fit that in with all yer shotgun practice and combat manuevers ?!

Orion, we made a super ugly post about that left wing BOLSHEVIK Joo, WaxNOSE again, you'll like it.
I added you to my roll, I didnt even know you were not on it.
You have your own icon on my blog, it says:
"Angry White Man" with a super ugly, hideous pic of McPAIN the traitor for open borders.
HALF WHITE POWER

My son thinks that the leftist jews are deliberately ugly as hell so that we can spot them when its time to make them atone for their crimes. I tend to agree.

You have your own icon on my blog, it says:
"Angry White Man" with a super ugly, hideous pic of McPAIN the traitor for open borders.

Oh no you didin, Thermo. Ohhhh no you didin! You marsh yo half honky selv back to yo blog and use this insteadt:

If you don't, I'll put up an icon of Madeline Albright or Golda Meir for your blog. No more cutie pies for you!

"Niggers and freedom; like oil and water"
They should have included that in the New Testament!

Shoot, that URL was too long. Here Thermo, use this one!

UGH!
That was UGLY with the heads!
I gave you that one, b/c there are so many stupid people that LOVE McPAIN, and that one shows McPain puking, like the PUKE he is LOL
I'll keep looking, but I suspect that that one will make people curious.
So, I will keep lookin for ya.,
Caio

DID you see the one that I wrote that I am a proud racist?

OK! I gave you a Tornado.
Yes, I am an unashamed person that supports the PEOPLE of Israel, NOT their govt.
This is what I think of their govt:
jtf.org/israel/israel.brainwashing.israeli.jews.htm
I dont think "all" Moslems should die. I think that we need to bring our guys home to protect US from this Govt.
I very much support our men, all of my family is in the Military.
:)
Thats all, you got a tornado.
God Bless, Whites Rule, the rest drool.
JWN is a White nationalist, a strong spy for whites.

I hate leftist jews (erev rav) but also non-jew white traitors. IMO the white traitors are the real problem, because the niggers and other muds wouldn't have risen up if the white liberals (abolitionists, 1960s, shit-stirrers, modern-day leftards, etc) had not stirred the pot with them!

When the race war comes the traitors amongst the whites and jews will not be given any quarter from me.