Thanks to VNN Forum for the link.

One of Russia's top criminal judges has been murdered in the capital, Moscow.

Eduard Chuvashov had presided over several high-profile trials, including the sentencing of some of Russia's most notorious neo-Nazis.

According to one of Russia's main news agencies, a security camera recorded the moment the gunman entered the apartment building and opened fire.

The judge had just come out of his apartment.

Mr Chuvashov is reported to have died instantly after being hit in the head and chest.

The gunman, who managed to escape, is reported to have been in his 20s and of Slavic appearance.

Officials have been quoted as saying this was probably a contract killing connected to the judge's work.

Local media said Mr Chuvashov was the judge who sentenced 12 ultra-nationalists from the Russian fascist group known as the "White Wolves" in February.

Mostly teenagers, the group were found guilty of a string of brutal murders against dark-skinned migrants from Central Asian countries, many of whom had been bludgeoned to death.

Our Russian comrades, don't stop there. Get your intelligence network to work and draw up a short list of people involved with "human rights" and immigration. Keep the offensive going. Nothing happens in a guerilla war when you're on the defensive. Hit'em hard, Hit'em fast, Hit'em often.

This should be happening here, in Europe and South Africa. I believe it's coming, and I can't F**king wait!! 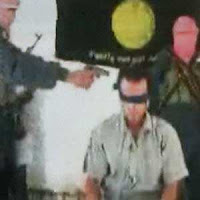 WOW! That is SERIOUS!!
You see the provacateurs on MY blog?
Oh, theres a massacre comin alright, I will be the FIRST to poin these EVIL shits out.

You'll be a matahari type, eh Thermo? Lure them to your den and then...Bam! Half White Power!

I didn't see the provacs, Thermo. I'll be over to help out shortly!

Yes, left wing JINO kikes, having the AUDACITY like the BOG to call themselves Jews. I kicked the TRAITOR off, he wanted me to say NOTHING about these Soviet SLIMEY TRAITOR Jews! IF I DONT say anything, we could ALL be killed, and we are NOT all BOG and Soviet!! WE ARE NOT!
What an insult to us roguish NO BS REAL Jews like the Confederate heroic Jews.
I have 10 Jews on my blog that are the ONLY SANE Jews in the USA--almost..
grrr