The real kind, not the fake, forced variety.  Europe and White folks in general are the most diverse people on earth.

ST. LOUIS • This weekend's Serbfest celebrates Serbian traditions and Eastern Orthodox beliefs. But the priest at Holy Trinity Serbian Eastern Orthodox Church, which was established a century ago, also made a point Saturday to express his love of the United States. 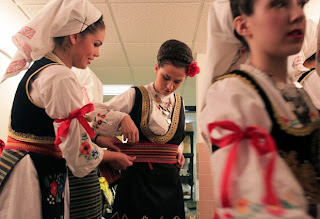 Think I'll stop by and dance with the cute girls!  Hope no Serbian guys get jealous and beat me up.

According to a 2007 American Community Survey from the U.S. Census Bureau, about 73,000 of more than 300 million Americans identified themselves as Serbian.

Dancers from Serbian Folklore Ensemble Kolo from Hamilton, Ontario, took the stage several times Saturday, each time with a different costume and dance.

Wow, only 73k? That's a pretty small community. Bet we have a lot more of the brown, muslim Bosnians here than we do Serbs. Disgusting.
Posted by Orion at 10:52 PM