We've added some new material to the blog that we hope you'll enjoy and take advantage of.  In our White Nationalist Reading Section we've added Julius Evola's Revolt against the Modern World, Yockey's Imperium,  Richard Fuerle's Erectus Walks Amongst Us and Icebreaker by Victor Suvorov.  All Excellent reading!

In our White Blogosphere section, we've added Aryan Myth and Metahistory.  If you remember Aryan Lord from the Phora or VNN, this is his blog.  Not updated near as much as we'd like but very good quality posts.  Here's an excerpt from  The Kali-Yuga and the Aryan Response

In the Golden Age man walked with the Gods. This was the age of Chronus when there was peace, plenty and harmony. The Old Testament of the Bible captures the essence of this myth with the story of the Garden of Eden when Adam and Eve walked with God and enjoyed innocent communion with him. The Indo-Aryans termed this age the Satya or Krta Yuga.
In the Silver Age the rule of Chronus was replaced by that of Zeus and death entered into the world just as in the Garden of Eden with Adam`s eating of the forbidden fruit he lost his immortality and became subject to decay and death. Not only mankind but the whole of creation began a process of decay. Men became impious and began to defy the Gods just as Adam defied his God. However men still lived long lives. The Indo-Aryans referred to this age as the Treta Yuga.

Last but not least, we we'd like to introduce that essence of the unstoppable Aryan life force, Craig Cobb!  Fresh from his escape from Canada, he's landed in Montana and is shaking things up, as usual!  His blog has the unique Cobbian name of "Gooooze:"Neo Weimar Goo Ooze" Podblanc.ORG/Gooooze Nooze".  LOL Craig kills me.  I love that guy, despite his religious views. 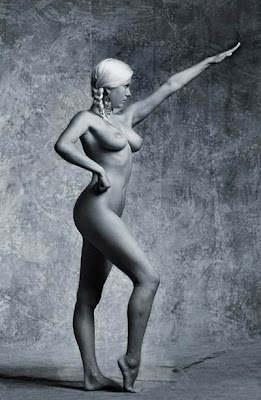 hmm.. Makes me wish I was blonde..

Well Thermo, you just send us a nude pic in the same pose, and I'll put it up! Incogman will be soooo jealous! :)