TRENTON, N.J. (AP) — St. Louis overtook Camden, N.J., as the nation's most dangerous city in 2009, according to a national study released Sunday. 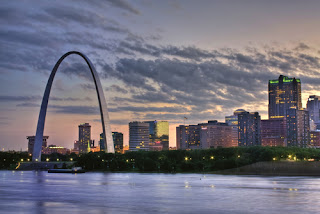 Detroit, Flint, Mich., and Oakland, Calif., rounded out the top five. For the second straight year, the safest city with more than 75,000 residents was Colonie, N.Y.

Wow, over 2000 violent crimes per 100k residents.  Mostly it's nigger killing nigger, but Whites are victims as well.  I think Saint Louis has something like 127 murders already this year, that with a population of about 350k.  Did you know that St. Louis used to be one of the largest cities in the country?  It had almost a million people at one time and hosted the 1904 Worlds Fair?  After the "civil rights" imposition on the country during the late 40s and 50s, the town emptied as negros spread out from their respective ghettos.

"That is not to say that urban cities don't have challenges, because we do," Van Ross said. "But it's that it's irresponsible to use the data in this way." But you can have civilization or diversity but not both.

Did you know that if you subtracted all the negro murders and rapes, carjackings, properties crimes, robberies and such, you would have a crime rate in St. Louis of probably .1 per 100,000?  Seriously, St. Louis proper would not have had a single murder committed by a white this year, AT ALL.  Interesting, huh?
Posted by Orion at 12:14 AM


I don't know about that. I think that poverty has a lot to do with it. I've found that I'm not as safe in low income areas. I believe that's true for most people regardless of race. I live in an area that is sectioned off from the "ghetto" and no one causes problems...not even the nonwhites. But due to the racist climate that we live in, the few rotten apples spoil the bunch.

"Violent crime is based on the percentage of niggers or other non-whites you have in your midst."

and the poorer the niggers, the more prolific the crime.

I can go into poor nonwhite areas and definitely feel the threat in the air. When I go into poor white areas, while I may not feel like I am among friends.....I do not feel the least bit threatened. It is more than just the money one brings home.

I also find that with nonwhites with greater income, while violent crime may go down, white collar crime, like embezzlement goes ballistic.

...therein lays the difference. There is shit in every racial barrel.....but some barrels stink a lot worse than others.

Greetings brother. Hope all has been well in your circle. May Christ continue to guide and be with you 'n family, blessing you with a close Christmas season amongst loved ones. Take care man.

Hey brother Jeff, I hope you have a Merry Christmas and a happy new year. I was just about to send you an email to check up on you. As for the blog, I was just following your lead and taking a break :)

Peace be unto you in the name of Christ.