Says the jew. With millions of Americans out of work and the economy on the brink of collapse, the jew now presents you with the solution after bringing you the problem in the first place. Read carefully and learn how the enemies of our people propagandize. The bankers and other white collaborators will do anything for more profits. This is why we are going to have to take a hard, hard look at the current system and change it when we come to power.

WHY ARE THESE ALIEN AMERICANS STILL WALKING AROUND ALIVE?! Let's correct that as soon as possible.

– Diana Furchtgott-Roth, former chief economist at the U.S. Department of Labor, is a senior fellow at the Hudson Institute. — 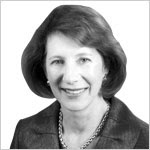 
When people think of what to do to help the U.S. economic recovery, admitting more immigrants into America isn’t what usually comes to mind. But a new study by Arlene Holen, an economist and senior fellow with the Technology Policy Institute, could contribute to resolving the current economic crisis.

The study finds that letting in more highly-skilled immigrants would generate more tax revenue, and over time raise labor earnings and national income. (Click here for the study in PDF format.)

Coincidentally, this week the Wall Street Journal reported that bankers are quitting due to onerous conditions imposed by the federal government on banks receiving public funds. Yet the new economic stimulus bill specifically makes it harder for banks to hire foreign workers, thereby limiting the flow of talent to a troubled industry.

If Congress had not imposed a tight lid on green cards, according to Ms. Holen, America in 2008 might have had up to 300,000 more highly educated engineers and graduate students performing path breaking research. They would have added about $23 billion to GDP, and the federal government would have gained about $5 billion more in tax revenues.

Based on Congressional Budget Office estimates, Ms. Holen (who used to be associate director at CBO) said that if comprehensive immigration reform had been enacted in 2007 then GDP would have been $180 billion greater over the next decade, and federal revenues would have been higher by $40 billion.

A similar argument was voiced by Representative Zoe Lofgren, a California Democrat and chair of the House Subcommittee on Immigration, Citizenship, Refugees, Border Security, and International Law in a speech on March 10. She said that “we need to jump start our growth through immigration.”

Ms. Lofgren explained that the billions of dollars allocated to scientific research in the 2009 economic stimulus bill cannot be effectively spent without more H-1B (temporary) visas for foreign scientists, “because all this spending needs people to do research.”

She said that comprehensive immigration reform, which was rejected by Congress in 2007, can pass this year if President Obama supports it.

To invoke a familiar truism, America’s immigration system is broken. Every year, the U.S. Center for Immigration Services issues only 65,000 H-1B temporary visas for skilled workers out of over 600,000 applications from employers.

A similar backlog exists for permanent residence visas sought by individuals both in America and abroad, with applications often close to ten times the number of “green cards” that may by law be issued. In 2006, more than 12,000 newly-arrived workers received green cards to work in the United States, and 53,000 temporary workers already in America were granted green cards.

This quota represents a small fraction of the U.S. labor force of 154 million. Even if the quota were raised to 150,000 a year, that would still be less than one tenth of 1% of the labor force, hardly a source of the mass depicted by anti-immigration xenophobes.

Columbia University professor Amar Bhidé has shown in his new book “The Venturesome Economy” that it’s efficient for Americans to get advanced degrees in law and business rather than in science and math if they prefer these fields. However, we need to issue more immigrant visas so that we have enough scientists.

Issuing more green cards and H-1B visas can provide effective economic stimulus—and this can happen at little or no cost to Uncle Sam or working Americans.

You can reach Diana Furchtgott-Roth at dfr@hudson.org.

Check out the comments. Looks like the hungry masses ain't buying it. That's a start.
Posted by Orion at 9:51 AM