We Are From France

Why would they want to leave France? Guess the Dole is better and the White Women easier? Seriously, I would recommend packing a truck with explosives and allowing those muds to hop on board!

You can learn a lot from the fighting Irish.

Truck drivers say they are being regularly attacked by migrants who are trying desperately to get into Britain from France.

Dozens of hauliers claim they have been assaulted by the migrants – many armed with knives and batons – who react violently when they are discovered hiding in trucks bound for the UK. 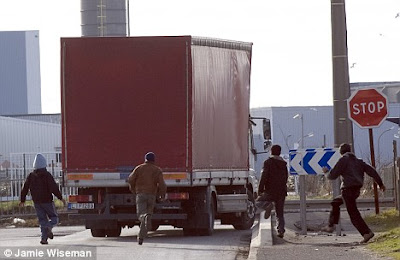 The British drivers are now calling on ministers to put pressure on the French government to take tougher action against those who are targeting them, sometimes on a nightly basis.

Mervyn Osgood, 54, a haulier from Maidstone, Kent, said: ‘I’ve been threatened with a Stanley knife – it’s happening once a week.

‘They’re not afraid to use violence – they’ve got nothing to lose. But I’ve everything to lose; this is my livelihood and I’ve been doing it for 35 years.
‘You’ve got to be a brave bloke to tackle them – they carry home-made batons as well. They get a length of hosepipe, shove metal bars down the end and start waving it at you – it’s a nasty piece of kit.

‘But the French police aren’t interested so you have to round up the fellas and get them out of your trucks yourselves.’ And he criticised the authorities for trying to pin the blame on drivers.

‘British immigration are worse than the French,’ Mr Osgood said. ‘They try and blame us for letting them on our trailers – they think we’re taking bribes.

I had four stow away with me in October and I was arrested and held for six hours. I’ve still got an £8,000 fine hanging over me.’

Gary Saunders, 50, a haulier from Basingstoke, Hampshire, who has been working the Dover to Calais route for 30 years, said: ‘There are hundreds of migrants trying to break into the trailers every night.

‘They wait for a back door to open if they think a truck is about to go and climb on board. And they hide in the bushes at the end of the road – the police know they’re there but nothing is done.

‘But if we don’t stop at the stop sign at the end of the road we get fined 40 euros. It’s a no–win situation.’

This article is truly frightening...so called migrants forcing their way into a nation. I'm all for reasonable immigration but stories like this set the cause back. Imagine if this were the other way around...migrants attacked for trying to gain entry.

This is a wonderful example of why we must tighten the reins on our border!

Seems like the SOS -
the thoroughly beaten down and overtaxed white man, not only forced to make more bricks with less straw ...

but not allowed to rightfully defend himself against the depredations daily committed against his people by the swarms of aliens without numbers unleashed upon us.

Whether it be the UK, the U.S., SA or wherever.

We've been pushed to this point by the
"policy makers" by design - and soon I believe they'll get much more than they wanted. God hasten that day.

As ol Stonewall would say - Drive 'em into the sea.