Com'on, lighten up! Or shall we say, brighten up?! Not feeling too angry today so I thought you might like to relax and take in lighter (no pun intended) fare. 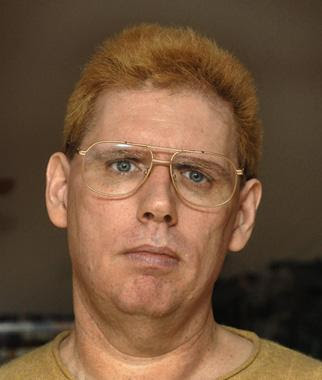 And before we move on, there's something else I must say. I just want you to know I find it difficult to even talk about men's hair. I find it, well, unmanly. When I get together with my brothers - one is a newspaper editor and the other a truck driver - we don't typically talk about our hair.

William confides to me that he, too, was hesitant to so publicly discuss his hair travails.

"I have been embarrassed by the whole thing," he says. In fact, when he rescheduled a business trip to Los Angeles he couldn't tell the whole truth.

"I told them there was a medical problem in the family," he says.

But if you're so embarrassed, why call a columnist? Why put Crouching Hair photos on the Internet?

"If it happened to a kid for God's sake, it could be a far more tragic outcome," he answers. "I am a father. God help us if this had happened to a 10-year-old kid."

First of all, the same chemicals used on an adult are not used on a child, says Vernon Suemnicht, who owns the O'Fallon Fantastic Sams and others.

He and William have spoken twice on the phone and probably won't speak again. They're at an impasse.

William says he does not intend to sue, despite stating otherwise on his website. What he really wants is the scalp of the woman, about 26 years old, who allegedly "butchered" his hair. He wants her fired.

In addition, William wants Suemnicht to pay whatever it costs for William to go elsewhere to have his hair turned to a more, shall we say, "neutral" color.

In response, Suemnicht says he will not fire the young stylist.

"I told him that is not going to happen," Suemnicht says. "She is a good stylist and she has a large following. Every once in a blue moon, these kinds of things happen.

Sounds like Vernon might have a lisp! Pretty funny story. You can read the rest of this um..catfight here
Posted by Orion at 11:58 PM