The Great Redeemer Overcomes the Children of Murder and Lies

Even though this is a Pre-Christian holiday, when our ancestors celebrated the rebirth of the Earth and the coming of the season, the Christian world still celebrates the resurrection of Jesus Christ. And as Pastor Peters says, we should at least give thanks that the Judeos chose one day to remember it.

What is the beauty of the Resurrection Story? The jews, who use murder as a political weapon to silence and intimidate their enemies, could not do the same to Christ! He overcame as a sign that we shall overcome, and that having faith, the gates of hell will never prevail over our people or the nations.

Even after Christ had risen, the jews still tried to kill the truth. We read in Matthew 28 the conspiracy to hide the good news!

And when they had assembled with the elders and consulted together, they gave a large sum of money to the soldiers,

and said, "You are to say, 'His disciples came by night and stole Him away while we were asleep.'

"And if this should come to the governor's ears, we will win him over and keep you out of trouble."

And they took the money and did as they had been instructed; and this story was widely spread among the Jews, and is to this day.

Even then, the jews were powerful enough to cover for Roman soldiers sleeping on duty! Do you know what would have happened to a Roman accused of sleeping on post?

Behold! Where is the Christ? 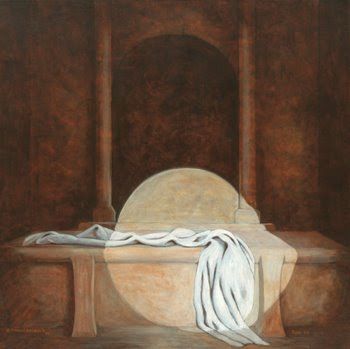 Here, the Rock of Ages! 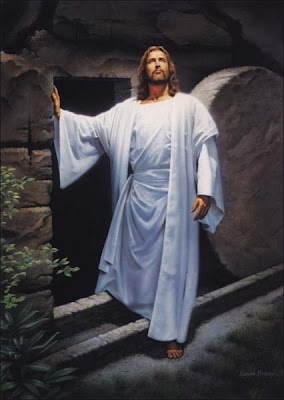 And I'm back. Now it's your turn, you race of vipers!


So the beauty of the story is that even though the jews will persecute, murder and lie to kill the truth, they cannot win. Have faith, we shall overcome!
Posted by Orion at 11:57 AM

(1 Peter 4:12-18) Dear friends, do not be surprised at the painful trial you are suffering, as though something strange were happening to you. But rejoice that you participate in the sufferings of Christ, so that you may be overjoyed when his glory is revealed. If you are insulted because of the name of Christ, you are blessed, for the Spirit of glory and of God rests on you. If you suffer, it should not be as a murderer or thief or any other kind of criminal, or even as a meddler. However, if you suffer as a Christian, do not be ashamed, but praise God that you bear that name. For it is time for judgment to begin with the family of God; and if it begins with us, what will the outcome be for those who do not obey the gospel of God?And, "If it is hard for the righteous to be saved, what will become of the ungodly and the sinner?" So then, those who suffer according to God's will should commit themselves to their faithful Creator and continue to do good.

(Hebrews 12: 1-3) Therefore, since we are surrounded by such a great cloud of witnesses, let us throw off everything that hinders and the sin that so easily entangles, and let us run with perseverance the race marked out for us. Let us fix our eyes on Jesus, the author and perfecter of our faith, who for the joy set before him endured the cross, scorning its shame, and sat down at the right hand of the throne of God. Consider him who endured such opposition from sinful men, so that you will not grow weary and lose heart.

(John 12: 23-26) The hour has come for the Son of Man to be glorified. I tell you the truth, unless a kernel of wheat falls to the ground and dies, it remains only a single seed. But if it dies, it produces many seeds. The man who loves his life will lose it, while the man who hates his life in this world will keep it for eternal life. Whoever serves me must follow me; and where I am, my servant also will be. My Father will honor the one who serves me.

PS:
The color of a man's skin does not reveal the evil in his heart. So judge every man based only on how he treats you, my brother.

Very beautiful pictures. I love all these pictures and your heartfelt comments.
Sorry for the FOUL language Lord.
I'll try to be better.