Happy Easter! We Have Survived Another Winter Together!

from the death of Winter springs new life!

Spring is coming to the land.

All around me I see signs---

The growing things are beginning anew.

It is a resurrection of the dance of life---

The dance of the stems and stalks

As they push forth from the Earth.

It is the season of creation.

The land has become fertile again.

The Earth is caressed by the loving touch of the Mother.

The ancient world has many examples of festivals to bring in spring with similar themes to the Christian tradition such as the Greek legend that tells of the return of Persephone, goddess of the earth, from the underworld symbolising the resurrection of life.

In ancient Rome, the followers of Cybele believed that their goddess had a consort who was born via a virgin birth. His name was Attis, and he died and was resurrected each year during the time of the vernal equinox on the Julian Calendar (between March 22 and March 25). Around the same time, the Germanic tribes honored a lunar goddess known as Ostara, who mated with a fertility god around this time of year, and then gave birth nine months later – at Yule.

The ancient Aryans celebrated the beginning of spring on March 25 when the first full moon occurred. This symbolized the growth of grass, leaves, crops - life itself. The Christians, not knowing the exact date of Christ's crucifixion, chose the first Sunday after first full moon to be Easter, the day Christ rose from the dead - back to life. The Aryan Odinist religion called this day Eastra, after their god Eastra (called by the Germans Ostara), the goddess of spring and new life. Baby bunnies and chicks were Eastra's special animals because they symbolized new life and fertility. It was said that "She resurrected the dead world with new greenery." Such animals were given to children at Easter until just a few years ago. Thus the Christians named this the date of an ascended Christ. 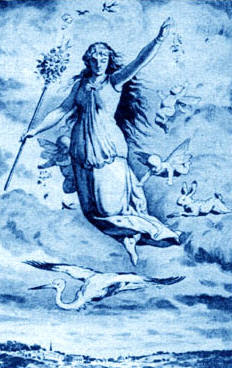 What about Easter Eggs and the Easter Bunny?

According to the Venerable Bede, Eostre was the Saxon version of the Germanic goddess Ostara. One delightful legend associated with Eostre was that she found an injured bird on the ground one winter. To save its life, she transformed it into a hare. But "the transformation was not a complete one. The bird took the appearance of a hare but retained the ability to lay eggs...the hare would decorate these eggs and leave them as gifts to Eostre."

Traditional foods play a part in this holiday, as with so many others. Ham is the traditional main course served in many families on Easter Sunday, and the reason for this probably has to do with the agricultural way of life in old Europe. In late fall, usually in October, also known as the month of the Blood Moon, because it referred to the last time animals were slaughtered before winter, meats were salted and cured so they would last through the winter. Poorer people, who subsisted on farming and hunting, would often eat very sparingly in winter to assure their food supply would last. With the arrival of spring, there was less worry, and to celebrate the arrival of spring and of renewed abundance, they would serve the tastiest remaining cured meats, including hams. This also marked a seasonal end to eating cured foods and a return to eating fresh game (as animals emerged from hibernation looking for food), and no longer relying on stored root vegetables, but eating the young green plants so full of the vitamins and minerals that all living beings need to replenish their bodies in spring.

So come all ye Aryans, let us sit at the table and celebrate the Spring, and remember the traditions of our distant ancestors, that we may never lose the connection to our blood. Happy Easter!

HAPPY EASTER TO THE KITTY IN THE CARDBOARD BUNKER!

Annie Puh Puh is now even as we speak, out hunting easter eggs and poor easter bunnies :( I hope she doesn't bring another bunny into the house.

Happy Easter to Lalala and her pagan sister, and to Vandon the fearless Aryan, Slayer of the Cactus!

Hey Apoo, you're in for a huge surprise, just keep your eyes open.