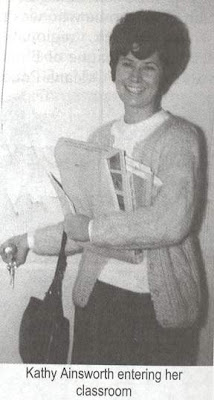 I'm very proud to share a birthday (day, not year for you VNN types) with one of the martyrs of our struggle, Kathy M. Ainsworth.  Born July 31, 1941 in Chicago, Illinois, her family moved south where she eventually ended up in Mississippi earning a college degree and becoming a schoolteacher.  Knowing the danger that our people faced and understanding our enemy could never be reasoned with, she became a member of  the White Knights of the Klu Klux Klan, an armed resistance group lead by Sam Bowers, may he never be forgotten.

On June 30, 1968 Kathy and another man, Thomas Tarrants, drove to the home of Meyer Davidson, the director of the subversive ADL planning to leave a bomb at his house.  They had been successful at bombing other targets and this should have been no different.  Unfortunately, traitors Alton Roberts and Raymond Roberts, who were in the pay of the ADL and the FBI, set them up and Kathy was killed instantly.  She was pregnant at the time.

We're not here today to discuss the mistakes of the White Knights or give traitors space in this post.  What we are here for today is to honor a fighter, a woman who had the courage and determination to take action instead of sitting around bitching and moaning and playing the blight wing game of eat, meet and retreat.

Kathy Ainsworth, RIP.  You will never be forgotten and your sacrifice has not been in vain.  A big hand salute to you!
Posted by Orion at 7:31 AM

Happy Birthday, Orion. May you have many more and live to see our enemies in their final death throes.

Thank you for this write up. Until today I had not heard of Kathy Ainsworth or her courageous and Patriotic exploits. This is a story that should be told, perhaps even more often than that of The Order.

Thanks, RM. Another 10 years have got behind me and no one told me where to run, hope I haven't missed the starting gun!

Kathy Ainsworth was a remarkable woman. If we had even 100 of her caliber we wouldn't be losing the war like we are. It's too bad that the white men of the day were to cowardly and traitorous to hunt down her killers. Unfortunately, most of them are now dead. May they rot in hell.

Kathy was an Hungarian/Italian, the only ones that seem to understand that our enemies only respond to violence. Not reasoning, not argument, not voting. Violence.

they were picking the right targets but there was no support, no follow through. It's a problem we must deal with soon or we're done for.

Yes, thanks for honoring the memory of Kathy. Too many people forget our martyrs.

I would like to see an analysis of the mistakes the Order made in trying to get the revolution going. I'm sure the surviving members would not object since victory is the ultimate goal.