When Will We Get It Right? 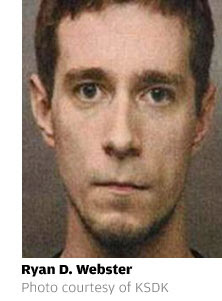 What a shame. This guy had rifles, silencers and C-4 that he pilfered from the ZOG.

Ryan D. Webster, 23, of the 100 block of Margaux Court, near St. Charles, admitted that he possessed a variety of explosives stolen from the St. Charles County Law Enforcement Training Center, 1835 South Highway 94, sometime between June 3 and 12, 2007.

He pleaded guilty of unlawful possession of a silencer and possession of stolen C-4 plastic explosives and other materials. Sentencing is set for Sept. 24.

Federal agents found the explosives — and more than 15 rifles, shotguns and pistols and a homemade silencer — in a search of Webster's home in January.

A confidential informer working with the Bureau of Alcohol, Tobacco, Firearms and Explosives said that Webster was preparing for the end of the world in 2012 and disliked African-Americans and Jews, Assistant U.S. Attorney Michael Bert said in court. Bert also said that a photo existed of Webster in full Nazi SS uniform.

Bert said that several witnesses told investigators that Webster both showed and demonstrated the explosives and searched the Web for information about the manufacture of explosives and the conversion of semi-automatic weapons to full automatic.

Next time someone is lucky enough to come in to some boom-boom, carefully wrap it up, put it in a container with some dessicant and bury it. How hard is that?

Meanwhile, out in Jesse James country, another patriot is arrested by the Great Satan:

A search of Joos’ 200-acre property was the result of an investigation into a “retreat location in McDonald County used by white supremacists,” said Matt Whitworth, acting U.S. attorney for the Western District of Missouri, in a statement.

source
200 acres of property to train insurgents in the coming civil war. Gone. Why? Because some idiot that will go unnamed dropped joos name at an "Aryan Fest" without checking or vetting the person or persons, who turned out the be a traitorious ATF "Confidental Informant" or CI.

So in a short amount of time we've lost a potential training site, explosives, manufacturing skills (silencers) and two patriots to what amounts to sloppy security.

This has to stop.

Number 1 - DO NOT DROP NAMES OR MAKE CONNECTIONS WITH ANYONE WITHOUT CHECKING THEM OUT FIRST. Of course, this only applies to activities that can get you thrown in a ZOG prison, not for "above ground" activities, though it wouldn't hurt to implement some security vetting in an above ground organization either. There's nothing worse than having a meeting with a punk informer or government agent sitting in on your discussions.

2. DO NOT TELL ANYONE THAT YOU HAVE EXPLOSIVES,GUNS OR ANYTHING ELSE. THIS IS NOT A GAME!!!!

3. DO NOT TELL ANYONE OF YOUR PLANS.

There is never going to be any meaningful resistance without security. It seems that White Nationalists, blight wingers or anyone else are incapable of maintaining even the most basic security measures. THINK! It's not that hard.

More Info here at originaldissent
Posted by Orion at 1:13 AM