Another White Man reaps the rewards of DIEversity. This will go in the cold case files, and the niggers that murdered this White Man will be free to rape and murder more Whites. St. Charles is becoming darker by the day, and soon it will look like St. Louis, and White victims won't have to make the river crossing to get hauled off to the morgue. If you don't think, you'll have to feel. This man's family is feeling the pain of losing a loved one because he didn't think.

The family of a St. Charles County man found dead in East St. Louis has boosted their reward to $7,000 for information that helps solve his murder.

Andy Bethmann, 37, was found dead Aug. 9 in East St. Louis about two weeks after he disappeared. He was last seen leaving the Baha Rock Club in St. Charles the night of July 26. Investigators believe Bethmann may have been killed for his car stereo. 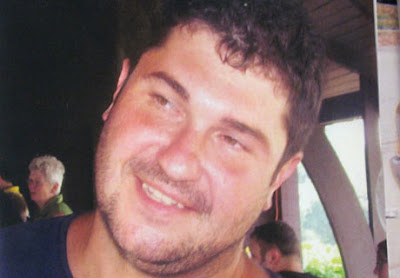 Last week, the Major Case Squad of Greater St. Louis turned its investigation back over to East St. Louis detectives.

Investigators have not yet found Bethmann's 1999 two-door brown Chevrolet Blazer, which had stereo equipment worth more than $2,500 installed in it.

Detectives believe they know why he was in East St. Louis the night he was killed, but they would not give details or say how Bethmann was killed.
Posted by Orion at 7:41 PM