Insane Lesbian Wants to Raise Her Own Troup

Picked this up from the August 7th Insurgent Radio Show, and the Thug report, both of which are on my links panel. 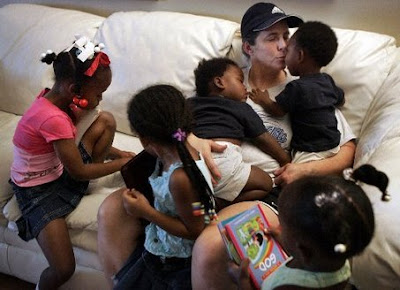 There are two things wrong here: Insane Altruism for mud races and Lesbianism. At least this sick woman was not trying to kidnap White children. This will be on the top of the list when we begin cleaning up our sick, degenerate society.

Houston woman charged with kidnapping five New Orleans children she took in after Katrina
by The Associated Press
Thursday August 07, 2008, 9:10 AM

HOUSTON (AP) -- Tavey, a single mother of two in Houston, welcomed the Alphonse family into her home after they were forced to flee New Orleans after Hurricane Katrina. The Harris County District Attorney's office says Tavey is sought on five counts of kidnapping and an Amber Alert has been issued for the children. Authorities are saying Tavey has abducted the five children and is believed to be in the North Texas area.
>