Surprise! White Man Behind Science That Won 2 Asians and a Jew the Nobel Prize

Never fails. White Men create, Asians copy, Jews steal. How do I know Prasher is not a jew? First, he's not in a lab working on white inventions like a jew would be because jews stick together. Second, He's not kevching and wailing that he's a victim, that's how. He's acting like a White man. And if not for Western Science and Education, those three who won the Nobel Prize wouldn't even know what physics were, let alone be able to build on what Whites create. Don't ever let anyone tell you that your people are not the light among the nations. The jews certainly aren't. 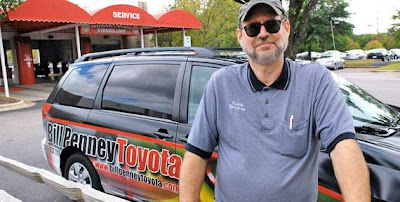 Twenty years ago, Douglas Prasher was one of the driving forces behind research that earned a Nobel Prize in chemistry this week. But today, he's just driving.

Prasher, 57, works as a courtesy shuttle operator at a Huntsville, Ala., Toyota dealership. While his former colleagues will fly to Stockholm in December to accept the Nobel Prize and a $1.4 million check, the former Woods Hole Oceanographic Institution scientist will be earning $10 an hour while trying to put two of his children through college.

"It's a cutthroat world out there," Prasher said during a phone interview yesterday.

Despite his contributions to the groundbreaking research, a Nobel Prize can only be shared among three people.

In 1961, Osamu Shimomura of the Marine Biological Laboratory in Woods Hole discovered the green fluorescent protein that gives the Aequoria Victoria jellyfish its glow. In the 1980s, Prasher began working with the protein, designated as GFP, after hypothesizing the gene responsible for the protein's fluorescent properties could be used to help view formerly invisible molecular functions.

After the American Cancer Society gave Prasher a $220,000 grant in 1988, he set about isolating and copying the GFP gene.

That caught the attention of Martin Chalfie, another of the Nobel Prize winners announced this week. The Columbia University researcher said yesterday that the organism he was working with at the time was transparent, and he hoped Prasher's work on the luminescent jellyfish protein would provide a way for him to see its molecular functions.

Four years later, as Prasher's grant dried up and he was no longer able to continue his own research, he voluntarily gave samples of the GFP gene to Chalfie.

The cloned gene was also given to Roger Tsien, the third Nobel Prize winner, who has been in the forefront of fluorescent protein research ever since.

"(Prasher's) work was critical and essential for the work we did in our lab," Chalfie said. "They could've easily given the prize to Douglas and the other two and left me out."

But instead of focusing on his hard luck, Prasher said he is happy for his former colleagues. While it was perfectly within his rights not to share the cloned gene with others, Prasher said he felt an obligation to give his research a chance to turn into something significant, even if he was no longer a part of it.

"When you're using public funds, I personally believe you have an obligation to share," Prasher said. "I put my heart and soul into it, but if I kept that stuff, it wasn't gonna go anyplace."

David Mark Welch, assistant scientist of evolutionary biology at MBL, said this sort of situation is a natural byproduct of working in an industry where competition for grant money can be intense. Some grants have 100 applications but will only fund 10 requests, Welch said. That means competition — even from fellow colleagues at the same institution — can be fierce and scientists often feel the need to keep all unpublished research a secret.

Welch praised Prasher's actions and said many researchers are finding it easier to obtain larger grants if they collaborate instead of alienate. "You have to put aside any sort of personal desires to be better than everyone else because if your grant isn't funded, you're in trouble," he said.

Prasher knows that trouble all too well.

After stints at a U.S. Department of Agriculture laboratory and working for NASA in Huntsville, Prasher was out of work for a year before he took a job at the car dealership.

Prasher said he has suffered from health problems and depression, some of which stems from being out of science for so long. But his sense of humor remains intact.

"If Marty and Roger want to show me some gratitude, they can always send some cash," Prasher said. "I'm accepting gifts and donations."

Prasher hopes the Nobel Prize exposure will lead to a job offer in his field, ideally back to Falmouth, where he said he lived happily for 14 years.

Having worked in research for years, I can tell you the grant process is tilted toward favoring jews and non-whites. The game is rigged from the start. Honest people will also tell you jews and a great deal of asians think nothing of appropriating your work and giving themselves full credit. It's rampant in all areas of R & D, medicine and more.