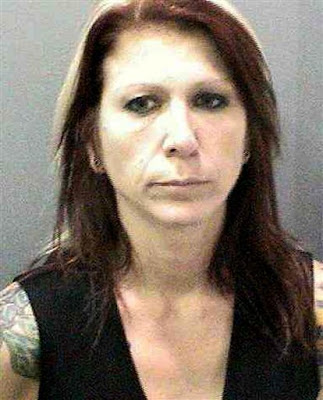 The above captioned picture accompanied a story about Mexican Invader Gangs being sweep up in a ZOG operation. Nowhere in the story was anything mentioned about a "white gang". See how this works? They put this image up front so subconsciously you will think that the mexicans aren't really dangerous, and this story's subject will fade from your mind and instead you'll link this patriot and the story to so-called "white supremacists". They want to take your attention away from something they loath to report but have no choice, so they put this image up of a patriot that was arrested days ago, and wasn't even involved in this sweep.

Still think the media is honest? Still think we are going to stop them peacefully?

The increase in arrests of alleged members of the gang Surenos 13 may represent the gang's increasing reach, or it may result from better classification of those arrested, authorities and academics said. The gang is distinct from the larger and better-known MS-13, but police or federal agents may have lumped them together during previous roundups.

Over the course of a four-month effort that ended Tuesday, officials arrested 1,759 people in 28 states, 33 percent more than they arrested during a similar campaign last year. Of those, 1,315 were gang members and gang associates, and 338 belonged to Surenos 13, according to figures released Wednesday by federal Immigration and Customs Enforcement officials.

A relatively small number of those picked up this summer, 86, were identified as members of MS-13. Federal authorities have said MS-13 is one of the nation's largest gangs, with 10,000 members in the U.S., Mexico, El Salvador, Honduras and Guatemala. During a similar crackdown last year, officials arrested 273 people identified as MS-13 members.

"In every area of the country, there are transnational gang problems," ICE assistant secretary Julie Myers said in an interview with The Associated Press.

Surenos 13 gangs, also known as SUR 13, may not be connected to gangs bearing the same name in other locations, she said. MS-13 continues to have a tighter affiliation across the country than those calling themselves Surenos 13, she said.

Another reason for the uptick in Surenos 13 arrests could be that for many years, law enforcement across the country had been misidentifying MS-13 members. There are about 1,000 gangs across the country with the same signifiers as MS-13, said Sergeant Andrew Eways, supervisor of the Criminal Investigation Section of the Maryland State Police.

Surenos means "southerner," Eways said. The term is often used in California prisons to refer to any gang member from southern California, he said. And No. 13 represents the letter M _ the 13th letter of the alphabet _ which symbolizes the gang members' alliances to the Mexican mafia, Eways said.

MS-13 and Surenos 13 are equally lethal and dangerous, said gang psychology expert Jorja Leap, an associate adjunct professor of social welfare at the University of California, Los Angeles. "I would not want to be greeted by either one of them."

Since 2005, Immigration and Customs Enforcement has arrested more than 11,100 gang members and associates from about 890 gangs. The federal government has partnered with state and local law enforcement to rid the country of the spreading gang problem, arresting gang members on administrative violations that result in deportation. The summertime crackdown, now in its third year, increases those partnerships during the season when more members are outdoors, Myers said. Over the past three years, ICE has seized 388 firearms and arrested 145 gang leaders.

Officials also arrested more members of smaller gangs than they had in previous years, and U.S. citizens accounted for the second highest nationality of those arrested, with Mexicans being the most, Myers said.

This summer's 1,759 arrests include Walter Garza-Morales, a 26-year-old Mexican and member of the 18th Street gang who was arrested in Ogden, Utah and has a history of criminal activity, such as intent to harm a family member.

"That is an incredible number of arrests, and law enforcement is doing its job," said Leap, the gang psychology expert. "But this is an ongoing problem.">

Why even mention this
" white supremacist "
gang at all in this story ? Yer right , only trying to deflect attention and get back to whom they consider the vilest of the vile , and their real intended target .

Tell me again what she was doing wrong ?