Prophet Yahweh, Seer of Yahweh, Master UFO Caller says that on October 31, 2008, superhuman black men, from other planets, will appear in their spaceships and hover over his UFO Summoning School for three days as a sign that all Americans should vote for Obama as President. 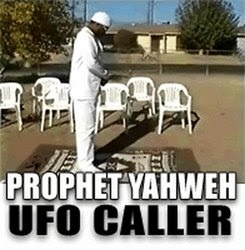 "YAHWEH wants people to know that if Barak Obama does not become President, America will quickly be led into a war with Russia via Iran that will result in: a cut off of oil from the Persian Gulf, a great depression, stock market crash, runaway inflation, devaluation of the dollar, food shortages, riots, famine, race wars, out breaks of disease, etc."

Let's hope he keeps his track record at 100%

Well, as to niggers visiting us in spaceships, of that I'm positive he's wrong. :)