Here's what Falasha and his ilk are fighting for, with every fiber of their being. Homosexual "rights", non-white immigration, aliens ruling over us.

Speaking out against this is hate.

Tan, a housewife who lives with Jay Mercado, her registered domestic partner, and their 12-year-old twin sons - all citizens - faced deportation to the Philippines in April until that order was blocked by special legislation sponsored by Sen. Dianne Feinstein, D-Calif. Rep. Jackie Speier, D-Hillsborough, had earlier obtained a three-week stay of the order.

"It was horrible - it was as if the world came down on me," Tan said by telephone Friday as she was visiting the Smithsonian National Air and Space Museum with her family...

"The thought of being separated from my family, my boys, because they're my life, my everything," Tan said. "There should be equality. This is what I believe America should stand for. ... Families shouldn't be torn apart."

Source (picked up off of News of the west blog, on my blog roll)

But what if a little White girl wants to stay? 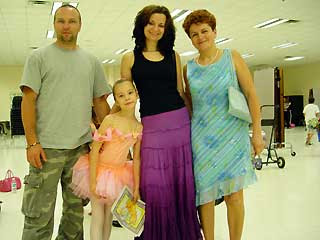 But Hubert and Agnes Bledniak's daughter, who has been in the U.S. since she was 2 years old, faces getting thrown out of America if she doesn't "voluntarily leave" the country by July 23.

If she doesn't go "home" to Poland — a country she hasn't seen since she was a baby — on her own, she'll be sent back involuntarily and not allowed to return for 10 years.

Source (From Kentuckyanna True news, on my blog roll)

So where is the congressional intervention for this family? Because they aren't homosexual or brown, none will be forthcoming. So I ask again:

Is this a government looking out for OUR interests?
Posted by Orion at 9:59 PM

Sounds like our folk trying to flee South Africa. First off, they make it damn hard for whites to leave anyhow.

Then they must have a work permit, a sponser. And then it's only for a set amount of time and it's back to the hell hole.

I'd go underground before subjecting my family to that.

I would love to get some good south africans here in Missouri. only the government won't allow it, unless of course they are racial aliens. We all know the drill.

You try to wake people up and they don't want to be woke up, they want to work, obey, consume in an endless death cycle. it's maddening. What kind of life is that in this day and time??

"What kind of life is that in this day and time??"

A self deluding make believe world devoid of reality. I believe some people, subconsciously at least, want to be dumbed down. They don't want to be bothered with reality and such.

And yes, some are so materialistic they only worry about -

It reminds me of what my mom wrote in my Bible that she gave me at age 11. I know she meant well but it reeks of "churchianity fables".

A calender is only a reminder our days are numbered.

I've long since changed that - I crossed out "our" and filled in with "the tares" and now it's righteous.

Hey Orion, tell incog I will BLOW HIS BLOG up if he does NOT let me BACK IN.
The MAD Jewess

But my dear Thermo, I think they are all nuked out!