Over one million names on a so-called "Terrorist Watch List". Now a Jew Senator wants to use this arbitrary list to deny people their second amendment rights.

What do you call a government that can violate your right against unreasonable search and seizure, continue to question you even after you've asked for a lawyer, suspend habeas corpus, listen in on every electronic communication and put you on a list at a whim?

I call that government ILLEGITIMATE.

And when they want to take your guns, they are dangerously illegitimate.

When is enough enough? 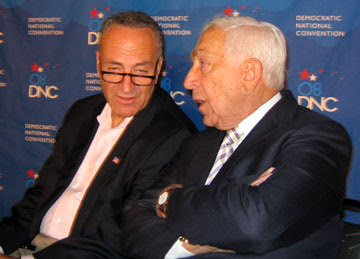 Gun purchases must be approved unless federal officials can find some other disqualification of the would-be buyer, like being a felon, an illegal immigrant or a drug addict.

“This is a glaring omission, and it’s a security issue,” Senator Frank R. Lautenberg, the New Jersey Democrat who requested the study, said in an interview.

Mr. Lautenberg plans to introduce legislation on Monday that would give the attorney general the discretion to block gun sales to people on terror watch lists.

The government’s consolidated watch list, used to identify people suspected of links to terrorists, has grown to more than one million names since the attacks of Sept. 11, 2001. It also has drawn widespread criticism over the prevalence of mistaken identities and unclear links to terrorism.

All that remains of this country are the frayed threads that hold the First and Second Amendments up.

If people can boycott ALL jew-owned businesses, and not patronize ANY jews in legal, medical, or financial industries, it would be a great start. And its all legal, just choosing to save your money for the Depression that has descended upon us.

Hard decisions are coming up - and fast.
Guess we're gonna see who will justify a few more degree's of "bending in the wind" and who will say - enuff is enuff.

"When the white man retains his guns, in a righteous and forceful manner, illegitimate govern - mutts and various thugs tend to pass 'em by. Rightfully fearing retaliation.

But when he wimps out and let's them take them, or God forbid, he willingly gives them up, he can assuredly count on receiving a good thumping, a scattering of his goodies amongst the heathen and yet more heavy 'n intrusive burdens to be placed upon him by those who take courage from your submissive nature."