Hot Times in the City

And it's not even summer yet! Yesterday was 91 on the thermometer, about 10 degrees hotter than normal. Have you ever noticed when the temperature starts to soar the negro murder rates soars along with it? When the weather gets hot something primordial connects with the African. He can hear the tribal drumbeats in his head and smell the missionary cooking in the pot. The blood lust calls out from every strain of the DNA.

Too bad a White Man had to find out the hard way. 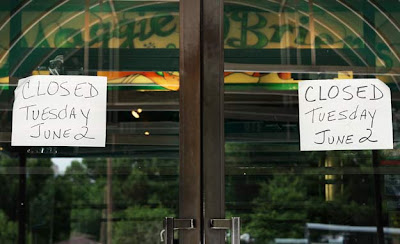 TUESDAY, JUNE 2, 2009- Closed signs hang on the doors to Maggie O'Brien's on Market St. in St. Louis on Tuesday morning. Late Monday night a bartender working at Maggie O'Brien's was shot during an attempted robbery attempt and later died at a local hospital. (Stephanie Cordle/P-D)By Kim Bell and Carolyn Tuft

UPDATED, 1:32 p.m. with more details of the robbery and shooting from police.

ST. LOUIS -- A bartender at Maggie O'Brien's was shot and killed in a robbery attempt late last night, police say.

Mike Dolan, 32, had been a bartender there less than a year. The attack happened about 11:45 p.m. Monday at the popular pub at 20th and Market streets.

Across the river, an African blows away an African cop who was almost ready to retire. This used to be a safe, white area a few decades ago, until the jungle took over. 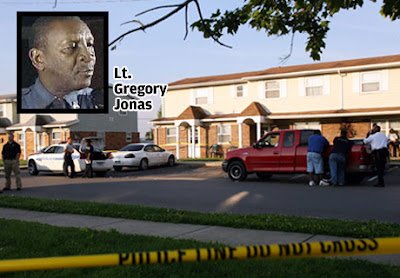 ...Another resident, Lillie Smith, said she woke up after the shooting, came outside and saw Jonas on his back, wounded on the ground, next to his police car with the car door open.

"He was shot up pretty bad, in the left eye," she said. "He was trying to say something. I stayed with him until the police arrived. I just told him, 'Hold on.' But he couldn't. That's sad. That's very sad."

Smith, 52, said she has lived in the apartment complex 14 years.

"We've been having a lot of shootings around here," she said. "Sometimes, they'll be shooting guns up in the air. Sometimes they are shooting at each other."

There are more stories, check out the Post Dispatch or the local TV news for more exciting stories of diversity in the St. louis area!

Meanwhile, White Missourians are arming themselves in anticipation of more benefits with the African experience. 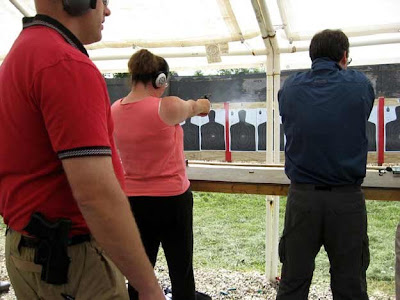 Nellie Williams, 48, of St. Charles (left) and another participant shoot a weapon at the firing range at Blackhawk Valley Hunting Preserve in Lincoln County while a firearms instructor watches. The classes are part of the required training for Missourians seeking a concealed carry permit. Williams said she was getting a permit so she'd have a sense of security when she went fishing alone in remote areas. "At least now I've got something," she said. (Susan Weich/P-D)By Susan Weich
ST. LOUIS POST-DISPATCH
06/01/2009

Missourians are rushing to arm themselves with concealed weapons at a record pace so far this year.

Criminologists and law enforcement officials say the increase may be driven by fear of increased crime due to the recession and the perception of potential loss of gun rights from a new Democratic president.

"People just don't feel safe, whether it's with the political structure or the economic situation," said Noelle Fearn, assistant professor of sociology and criminal justice at St. Louis University.

Missourians ain't all stupid. They know the police can't protect them. They are busy doing other things, like checking up on their racial kinsfolk.

A former St. Louis police officer was sentenced to probation and 40 hours of community service Tuesday for misusing a law enforcement database.

Marla A. Arinze, 43, of St. Louis, was found out when investigators overheard her on a wiretap in another criminal case agreeing to run a name through the REJIS database to search for immigration warrants, according to court testimony.

That's it for today, folks. Join us next time for Summer in St. Louis!

Man - you aint kidding it's been hot.
And they shur 'nuff been out bopping 'n
hip hopping. Be blasting their 9's all night.

Everyone KNOWS crime will go up. The economy is cracking and the required brick quota goes up.
Besides, it beez a whole lot easier to just take from the honkies. Or so they thought.

Buy 'em up folks, yer gonna need 'em. Be prepared to do your part in the environmental cleanup project at hand. Cops wont be everywhere - think LA riots ... nationwide.

Well yer summer is off to a big bang! Good grief afreekin nee-gers!