This happened just minutes away from me. This nigger was carrying a .40 caliber handgun, a very lethal round. He thought he was going to pull an Oakland on the O'fallon cops. He was wrong. No more whites wymins for you, NIGGER.

O'FALLON, Mo. -- Police shot and killed a man brandishing a handgun this morning at an apartment complex in the first block of Millcreek Parkway.

Killed in the shooting was Maurice Johnson, 30, of Wentzville. 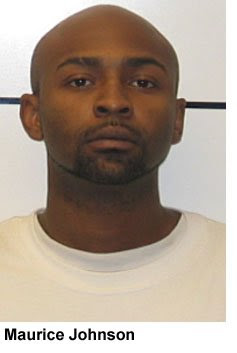 My name Maurice. I dead.

At a press conference this afternoon, Police Chief Bill Seibert gave the following account of the shooting:

At 8:54 a.m., police received a call from the Rock Creek Elementary School in O'Fallon, asking police to check on a woman at one of the apartments. The caller had been told that the woman had been threatened over the weekend.

Six O'Fallon police officers went to the apartment complex. They knocked on the door, no one was there. A neighbor came out and told police that she would contact the woman that they were going to check on.

Police got in touch with the woman and she returned to her apartment. She let police in to check on her apartment and, after a few minutes, four officers left. They were told by their superiors to keep watch in case the man who had threatened the woman returned to the apartment.

The other two officers were in two back bedrooms in the apartment, when Johnson came in through the back door. The two officers confronted Johnson in the hallway and tried to arrest him.

That's when police said Johnson pulled out a .40-caliber, semi-automatic handgun. Police then fired on him. It's unclear how many shots were fired, but Johnson ran back out of the apartment. Johnson collapsed and died just outside of the apartment's back door.

Johnson and the woman were an estranged couple, but had never married. The couple had a child together; the child goes to Rock Creek Elementary School. VIDEO: Public information officer gives update

Seibert said that police had been called to the apartment in the past. Police had warrants for domestic assault already out for the Johnson's arrest for prior incidents.

"We don't know who fired first at this time," Seibert said. "It was very close quarters."

The two officers are now on administrative leave, as per department policy. The policy requires such action any time an officer is involved in a shooting. They will be off work until an internal investigation is complete.

The officers have between seven and 11 years of service on the department.

In November, a lab technician was working at the St. John's Mercy Urgent Care center off Highway K in O'Fallon, Mo., when her ex-boyfriend walked in and shot her. An O'Fallon police SWAT team then shot the man. The woman -- Jenenne Marie Meadows, 47 -- and the ex-boyfriend died at the scene.

Meanwhile, in the neighborhood off of Highway K and Mexico Road where the shooting happened today, neighbors seemed worried.

A neighbor -- Norma Haines, 69 -- lives in the Mill Pond Apartments for seniors, a complex situated next door. Haines said that she heard several shots fired this morning. She said the apartment complex where the shooting took place has been a frequent source of complaints.

"There's always some unsavory stuff going on over there," Haines said. "Those apartments have been kind of a worry."
Posted by Orion at 9:49 PM

Maurice's skull is fucked up. I've seen fucked up nigger skulls before, but never one that looked like a Hershey's Chocolate Kiss.It should either be in a traveling carnival side show of human oddities or on my computer desk as a paper weight.

What's really sick is some stupid, deranged white woman thought it attractive enough to shit out some carbon copies. Pathetic.