It's Sunday, boys and girls, time for another church lesson. Oh no, I'm not talking about a lesson from one of Satan's emissaries, like this one: 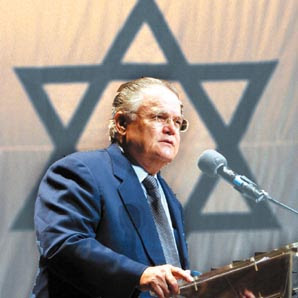 But a lesson like this, if you would just READ!

Therefore shalt thou serve thine enemies which the LORD shall send against thee, in hunger, and in thirst, and in nakedness, and in want of all things: and he shall put a yoke of iron upon thy neck, until he have destroyed thee.

The LORD shall bring a nation against thee from far, from the end of the earth, as swift as the eagle flieth; a nation whose tongue thou shalt not understand;

A nation of fierce countenance, which shall not regard the person of the old, nor shew favour to the young

Verint and Narus, the two Israeli corporations, are 'super intrusive -- conducting mass surveillance on both international and domestic communications 24/7,' and sifting traffic at 'key Internet gateways' around the US, Bamford claims.

"The greatest potential beneficiaries of this marriage between the Israeli eavesdroppers and America's increasingly centralized telecom grid are Israel's intelligence agencies," Bamford writes.

Welcome to America's Surveillance Society, brought to you by COUNTERFEIT ISRAEL

Jewish control of America, Ha! What a canard.
Posted by Orion at 2:58 PM

Now yer on a roll brother ! Until our people figure out WHY this is all happening and what must be done to rectify this inbalance , we accomplish nothing more than shadow boxing . A repentant return to our God precedes our victory .