Surprise. Niggers Did It.

These two niggers, one of which had a job paying $700 a week and both living with their parents rent free, couldn't resist the call of their genetics and are now in jail without bond for killing two humans at the Steak N Shake in South County. Less than a hundred years ago, the jail would have been stormed and these pieces of filth would have been strung up, shot and burned. Of course, that's when Aryan Justice prevailed before becoming judaized. That is going to change though, and soon. Very soon. 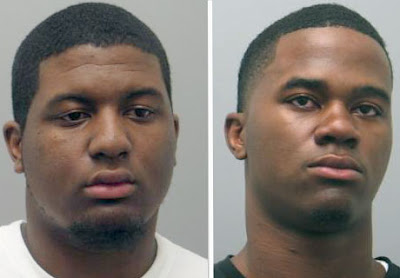 Tony Akins Sr., the father of the two men, told the Post-Dispatch this morning that he, his wife and four of his six sons were sleeping in the home when police broke down his front and back doors. Police made them wait on the front lawn while they searched the home, he said.

Police carted off evidence taken from the home. Tony Akins Sr. said his two sons had worked at the Steak 'n Shake until about six months ago. The older one was fired; the other one quit, upset because he thought he was being passed over for promotions, Akins Sr. said.

"If they done this .... I just don't understand why, because they had everything going for themselves," Akins Sr. said.

The Akins' small, frame home is well-kept with flowers in front, but family members were sweeping up the broken glass and cleaning up other debris in the wake of the police search.

Notice the slant on this story. Por niggras, they couldn't have done it. And looks what da poleece done did to the well kept nigger home!

You can't leave comments on this story, they have closed it down. Know why? A kike named Kurt Greenbaum closed it. Imagine. A kike censoring a comments section. Unheard of. Fuck you, Greenbaum.

Well , good for the cops for going after some of the real trash ... be they black or white . Damn lucky broken glass was all they got . Vigilance committees will probably hold court in the yard .

Hmmm.....so, they had "everything going for themselves". Most blacks are incapable of rudimentary logical thinking. That is why it doesn't matter what actual circumstances they find themselves in, they always resort to violence.
LFD

I hate those niggers too. If murder were legal, I'd personally drive around and shoot every damn nigger that I see.

I really think I could shoot niggers all day long and still sleep like a baby at night. I really do. At least, I feel that way.

get a scope.....night vision.....and go up to north co anytime and practice. you would be doing us all a favor.

ST. LOUIS BLACK CAPITAL OF THE COUNTRY AKA NIGGER

I moved to Monkeyville in 2006, biggest fucking mistake ever. My spidersenses said, "don't fuckin do this" but I did. No one hates niggers more than me. If I knew of a KKK chapter in the area, I'd join. I'm a black belt and I think I make a good asset...

STL police SUCK!!!! Fucking niggers start shit with me when I am on my own property minding my own business all the time! Stinking cops won't do anything about it. St. Louis COPS SUCK! I hate this fucking city!!!! It's over-run by a bunch of broke niggers.

When will this nigger shit end? I hope I'm alive to see the white man take back what he built from the fuckin' Gimme Niggers!!