Taking Care of Your Own, A Tale of Two Races

The first is about a boy who suffers from a rare disorder and how the family and the community responds. As I've said before, only Whites are capable of true altruism. Do you think if this kid were born in India or Africa, he would be cared for? Only if Whites were there. Otherwise, he'd be out in the streets to beg and fend for himself or if in Africa, he's be on someone's menu. 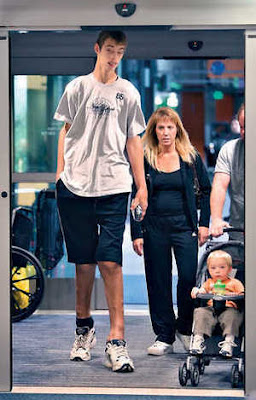 Back in November, Brenden's hometown of roughly 15,000 people raised $20,000 to help buy basics -- like a bed and a desk -- for Brenden's oversize frame. Because Brenden can't easily bend his knees or ankles, the local fire department donated a lift chair, the kind that electronically powers him into a sitting or standing position.

You can read the rest here

Meanwhile, in East St. Louis, Negros express their feelings for the disabled, as seen in this story

The victim, who police did not identify, was hospitalized with injuries investigators termed not life-threatening, including broken bones and severe malnutrition that winnowed her weight to less than 100 pounds.

Police said the victim's mental capacity of a 6-year-old diminished her ability to report the abuse, inflicted while she lived with an aunt, who investigators say directed the beatings until she died last week of a massive heart attack.

Two teens, no less. They learn 'em early in the community of color.
Posted by Orion at 12:49 PM

Hey, u piece of shit: u got real nice blog, for a stupid punk.

Have a nice day, shit-for-brains. A.

Wow, finally, something apollonian wrote is "kinda" readable. You're improving!

Now, what's that got to do with the subject of the blog post? You're all over the place apollonian, just as any mentally unstable person would be.

Don't make me turn on moderation.

"Don't make [u] turn on moderation"?--who gives a shit, dumbass? And to think a brainless white nigger like u STILL has Maynard's mestizo link?--what a moron. Psst--quick take it (Maynard's link) down before people see what a complete idiot u are.

Shithole--are u ready to go to Mexico, land of mestizos?--for that's where u belong, stupid puke. U don't get it, do u, u brainless shit?

CONCLUSION: Usually, I try to be fairly somewhat intellectualistic, u know? But just today it's so easy to spew purest contempt at purest shit like u pretending to be white. Death to u, u puke. Yeah, heck--why not turn on ur "moderation," u slow-witted zero? Honest elections an death to the Fed. Apollonian

Maynard, as u surely know, pretends to "white nationalism." Only thing, we find out lately is, evidently, such "white" now includes mestizos--what a revelation, eh?--it explains a lot of things to me, anyway.

CONCLUSION: Maynard is presently continuing to brazen it out (as we see by his latest post at TheWolfsPress.blogspot.com, "Apollonian...," 24 Sep 08)--I guess he's going to be leader of an entire branch of his own "white nationalism." So my question is, if it includes mestizos, does it also include mulattos? Honest elections and death to the Fed. Apollonian

We'll have to see what Maynard has to say in his defense. Do you just believe everything you're told? Wait, don't answer that.

Yes, it could be a huge joke/sham--but Maynard has already had his opportunity to say something on "James's," the white nigger's, blog--unless that's sham too, eh?--u stupid white nigger.

CONCLUSION: Maynard is just brazening it all out. MAYNARD IS A MESTIZO-LOVER, dumbass--Maynard includes mestizos as "whites," stupid white nigger scum. "Orion," problem w. white folks is stupid white nigger like u and Maynard--do u think? Honest elections and death to the Fed. Apollonian

Alright man. Could you go down to demetris' blog and pontificate to him? I think you two are like peas in a pod.

Dipshit Still Trying To Figure It All Out
(Apollonian, 25 Sep 08)

Wow--I see little dumbass still has link to Maynard's blog--still slow on the up-take, eh? So tell us--are u for white folk or are u for mud-people?

But I know--everything is "pontification" to u, isn't it?--brainless white nigger scum. Honest elections and death to the Fed. Apollonian

Hey Orion, I see you're trying to get rid of Apollonian, but I want to ask him a question while he's here.
Apollonian, - your sign off nearly always includes "Honest elections and death to the Fed." The "death to the Fed." part I think I understand. But what do you consider honest elections? Do you think every American citizen of legal age should have the right to vote? Or should it just be male landowners, or should the voting age be raised? Or maybe a combination of landowners/former military? What are your thoughts on this?
Laura from Dallas

By golly "Laura," but u actually speak something somewhat intelligent for once in ur pathetic life, don't u?--I'm impressed. And it's truly fair question which deserves substantial answer.

But first I'll note I'll only answer upon condition u comment upon Maynard's being exposed for the race-mixing, mud-race-, mestizo-progenitor he is. I mean for gosh sakes--what kind of "white nationalist" mates with mestizos?--what kind of "loyalty" is that? Isn't Maynard rather a "mestizo nationalist"?

And isn't it a fatuous, brainless joke for Maynard to write against Bill White (OverThrow.com/blog), Maynard babbling about "real white nationalists," as he does?

Regarding "honest elections"--it would seem honesty is pretty straight-forward for meaning, isn't it? Thus it wouldn't matter who was eligible for suffrage; pt. is results ought to honestly reflect the actual voting, regardless, a secret ballot, openly counted, etc.--it's not like it's something arcane and little-understood.

As for limitations/conditions/qualifications upon who is allowed to vote--remember, pt. is obtaining the "consent" of the people so as to rule-out dictatorship, giving the people fair opportunity to negative or veto any move by selected government and officials. For knowing people genuinely support gov. naturally gives that gov. most strength/credibility in which people can have most confidence.

Actual qualifications (as for age, etc.) are mere practical matter, as practicality is legitimate consideration. "Voting" ought to be organic, natural part of gov. There's no reason all/any rational people shouldn't be eligible. For example, if people are subject to serving in armed forces at a given age, then that age could also well serve for voting age, why not?

CONCLUSION: Now since I answered in good faith, I demand u speak upon chutzpah Curt Maynard, the girly-man, who mates with and procreates mud-race. Honest elections and death to the Fed. Apollonian

Before I answer the question about Curt Maynard, let me give you a little background. I'm very new to all this - I only started reading Curt's blog in June (or thereabouts). Previous to that I only read Spirit, Water, Blood and Signals from the Brink. And, it took a long time for my eyes to be opened to what's happening to America. I only read SWB and SFTB because I thought they were nuts. I would stop by to see what I considered a bunch of idiotic racists spouting hatred. Eventually, of course I realized that what they were saying matched observable reality. So, I'm really ignorant about everything concerning the White movement. That's why sometimes reading your commentary is tough. You already know a lot about it, so you have a tendency to "talk over our heads". What I'd like to see is your commentary doing more of a job of connecting the dots for people like me. But if you don't, so be it. I'll just look up everything.
Now, about Curt. So far, he hasn't said anything about his spouse (that I know of). I'm waiting to see if he does. Of course I sure hope non of it is true. But, even if it is true, don't you think he's done quite a bit to educate the public about the jews? I do. For newbies like me, he has a great way of explaining their influence and plans. Thanks for anwering my question.
Laura from Dallas

Patriot Business Not For Faint Of Heart
(Apollonian, 26 Sep 08)

Okay Laura, fair enough for what u say. Note I have an archive of stuff at NewNation.org under "commentary" heading going back yrs now, where u can get good details for substantial philosophy, beginning at basics (I used to be Phil. major at school; was Hist. major in grad school which I was not allowed to finish due to non-PC). Lately, I've had quite a few commentaries saved up at WorldPeace-Phaedrus.blogspot.com, going back a couple of months.

Yes, I agree w. u, Maynard does indeed talk a "good game," esp. for those just beginning to investigate issues. But Maynard is superficial. For example, Maynard pretends to "good-evil," but can't provide a premise thereto. And it's this "good-evil" fallacy/delusion which I hold has been worst disaster for white folk and culture--but there's more on that at NewNation.org, as I say.

Laura, u should know one's gotta be tough in this patriot's business, so if I mis-judge u, due to unfortunate association w. such as Maynard, u need to be able to shrug it off--people will respect u all the more.

Maynard seems to believe in what he's doing, and indeed comes up w. some interesting material, but u'll see he's quite flakey. Another flake is Alex Linder/VNN (VanguardNewsNetwork.com) who's anti-Christ--which isn't going to work for us white folks. Non-Christian is okay, but anti-Christ only works to benefit of Jews who will actively fund such anti-Christs.

CONCLUSION: Note Laura, Jews got incredible funding advantages (they just counterfeit it all up--literally) on us, hiring numerous queers, for example, to spam patriot blogs, etc. So we patriots can't be too careful or incisive for our analyses/dialectic. Good luck. Honest elections and death to the Fed. Apollonian