US War Criminal Dick Cheney issued a direct threat to Russia today, saying the Zionist Occupied Government will incorporate the former soviet republic of Georgia into the Axis of Evil, Also known as NATO. Georgia's Israeli controlled puppet president, Mikheil Saakashvili, wagged his tail in appreciation. The War Criminal went on to denounce Russia's "illegitimate" invasion of Georgia, seemingly unfazed by his hypocrisy in leading the United States in an illegitimate, illegal aggressive war in Iraq, an illegal act based on lies he had a major part in propagating. 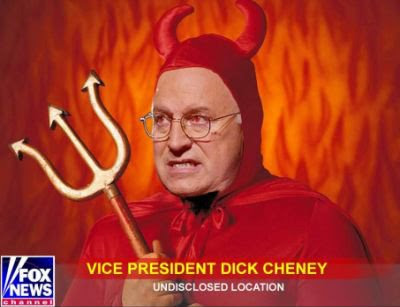 Dick Cheney in his Future Home

The War Criminal Dick Cheney also pledged 1 billion dollars in economic and military aid to Georgia, despite consulting with the taxpayers who would foot the bill. Of course, in the jewish democracy practiced in the United States, permission is not needed as the citizen's sustenance is taken at gunpoint.

It is still unclear why Russia has allowed the War Criminal to leave Georgia and haven't had him arrested.
Posted by Orion at 8:58 PM