This is too cute. Mika is a lot different from when I was six. Back then, girls had coodies and "No Girls Allowed!" signs abounded wherever we went. How times have changed! I just hope when they get older, they understand the dangers of going to Africa. I don't particularly care for the term "lovers" as it implies a sexual relationship but we all know that's not the case here. It's just the MSM being jewish, as usual.

German lovers – aged six and five – try to elope to Africa Mika and his girlfriend Anna-Bell found on way to airport with lilo, swimming trunks and a witness for the wedding in tow 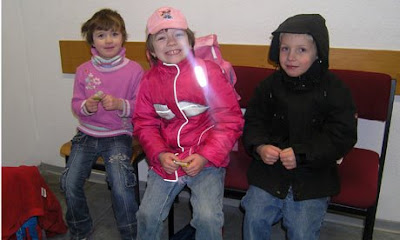 Anna-Bell, Anna-Lena and Mika at the police post at the main railway station in Hanover, central Germany, after being caught heading for the airport so Anna-Bell and Mika could 'get married in Africa'. Photograph: /AFP/Getty Images

It is a dream that has been shared by lovers across the centuries – the chance to elope to exotic lands. But few would have been as bold and spontaneous as six-year-old Mika and his five-year-old sweetheart Anna-Bell who, after mulling over their options in secret, packed their suitcases on New Year's Eve and set off from the German city of Hanover to tie the knot under the heat of the African sun.

The children left their homes at dawn while their unwitting parents were apparently sleeping, and took along Mika's seven-year-old sister, Anna-Lena, as a witness to the wedding.

Donning sunglasses, swimming armbands and dragging a pink blow-up lilo and suitcases on wheels packed with summer clothes, cuddly toys and a few provisions, they walked a kilometre up the road, boarded a tram to Hanover train station and got as far as the express train that would take them to the airport before a suspicious station guard alerted police.

"What struck us was that the little ones were completely on their own and that they had lots of swimming gear with them," said Holger Jureczko, a police spokesman. He described Mika and Anna-Bell as "sweethearts" who had "decided to get married in Africa where it is warm, taking with them as a witness Mika's sister".

Anna-Bell told the German television station RTL: "We wanted to get married and so we just thought: 'Let's go there.' "

Mika and Anna-Lena's mother, who was not identified, said she had known nothing of her children's plan. "I'm still in a state of shock. I thought 'I'm playing a part in a bad movie.' When we realised the kids were missing we went looking for them." But only when the police called did they realise what had happened.

Asked why they failed to let their parents know, the children said they thought they would not be gone for long.

Mika told police he instigated the plan having been inspired by a winter holiday with his family in Italy. "Based on this the children began to make plans for the future," Jureczko said.

To allay their disappointment at being caught, Hanover police gave them a tour of the police headquarters. Jureczko said: "They'll have the chance to put their plan into action at a later date".
Posted by Orion at 12:24 PM

I find this to be a bit troubling on so many levels.

How so, Dr. Lormarie? What I find amazing is that the authorities didn't seize the kids and put them in foster homes, like they would in the US.

they walked a kilometre up the road, boarded a tram to Hanover train station and got as far as the express train that would take them to the airport before a suspicious station guard alerted police.

I find it hard to believe that children can travel all the way to a train station without anyone asking questions. I'm also appalled about the way in which the children are described in the article...like adults in love. I wouldn't be surprised if this was all a hoax.

Well, it was early in the morning and probably anyone that saw them at the station assumed their parents were nearby. I agree, to call them "lovers" was in really bad taste, as I mentioned in my remarks.

Pretty cute though, how they brought their swim gear and didn't think they would be gone long, LOL! Ah, the innocence of children.

With all the multi-cult propaganda loose in Germany, I can't believe the boy had the good sense to choose a partner from his own race! Hopefully, his wits will remain somehow unadulterated when he is truly old enough to choose a wife.
LFD

Well, it was early in the morning and probably anyone that saw them at the station assumed their parents were nearby. I agree, to call them "lovers" was in really bad taste, as I mentioned in my remarks.--Orion

Don't mind me. I'm often told to loosen up about things...quite rigid if I must admit.

Yes, it's worrisome that younguns were out 'n about, subject to some pervs foul and mischievious intents.

But ya gotta admire the lil rascals persistence. He was gonna marry the gal he loved !

Yep, it is a wonder the children were not snatched up by the ever watching police state.

Surely God sent angels to watch over them.
------------------
yeah, I remember Betty T. back in elementary school well. Made my study of numbers and letters quite difficult indeed !
Pigtails ... fiesty - you know the drill.

Sorry Apo, but you've been DELETED! Fuck, that feels so good, knowing you spent 2 hours with your tongue hanging out of your mouth as you clicked away typing your blathering BULLSHIT, saying nothing AT ALL!! Bahahaha!

You're the reason this blog is moderated. Not because of joos or niggers or anything else, but YOU! I might have a simpleton blog but IT'S MY BLOG AND YOU AIN'T GOING TO FUCK IT UP LIKE YOU'VE DONE SO MANY OTHERS! Understand?

CONCLUSION:
Only Aryans, Honorary Aryans and thoughtful opposition are allowed to post here. Mental cases with elevated privileges to use the public computer at the institution they are committed to ARE NOT.
Honest death and elections to the Fed.

Man, I seen that - conclusion:
at the end and thought ... shit, here we go again. What a pleasant surprise though.

Moon Shot has a few good points but he never knows when to shut the hell up.
Modesty/finesse are not his best qualities.

The world revolves according to him, and without his insight -
"indubitably" all others shall fail.

I still stand by my earlier statement when I pegged him as a disinformation agent. He slanders true Christianity and gives no plausible reply to inquiries concerning his
"faith".

He has admitted Christianity is nothing but a means to an end for him. But many embrace him for he screams nothing but "kill the jews" which is a popular antidote for our problems.

Why even mention Christ when he explores no other sayings/mandates of His ? He avoids any mention of repentance, Gods law or Gods covenant with the Anglo Saxon alone.

A wolf in sheeps clothing. Why, even now can you not hear him howl with indignation in the distance (on other blogs)? Well done.
.............
(to disagree with him is to earn his label of - jew lover. This is his only retort. We are well aware of the jews complicity but that only scratches the surface of why they are in the position they are in over us)

Apollonian,
I deleted your most recent tirade against Orion.
Oh, and.........you're slipping. You failed to insert "Puke", "Die u puke" and "death to u".
Such a disappointment.
LFD

LFD gots the big muscles! He doesn't allow squirrels in the house, no siree!

Hang in there yoos guys ! Yall got a loyal reader in Virginia.