Remember this next time an Anti-White racist lectures you about "love and equality" and cowards wearing "hoods". Usually, what the jews and their camp followers accuse you of, they are guilty of themselves. These are American kikes, btw. You know, the same ones that get on blogs like incog man and Civil Platform and spew their hypocrisy and hate. 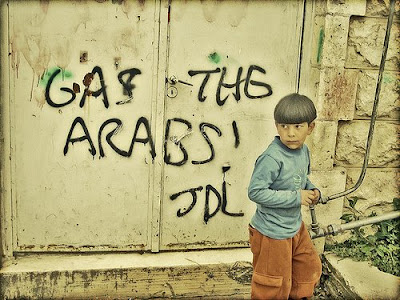 Not only do they serve long and tiring hours in the reserve forces, and not only are they forced to deal with violent clashes with settlers, but now, Border Guard officers of Ethiopian descent are also faced with rising racism.

"Niggers don't expel Jews! This isn't what we brought you to Israel for!" are just some of the degrading slurs Border Guard officers reported hearing from masked settlers.
During the violent clashes between Israeli forces and settlers in Hebron on Tuesday "a bunch of veiled people started yelling at us: Who are you to expel us from our home? An Ethiopian does not expel a Jew! A nigger does not expel a Jew!" one Border Guard officer of Ethiopian descent recounted.

"I just didn't know what to do with myself," he said.

Officers 'deeply offended' by remarks
And it turns out this was not the only such incident to take place. Another officer reported that while arriving to make an arrest about a week and-a-half ago, a group of youths verbally attacked him saying, "Who told you to come and evacuate us? You Ethiopians. What are you, this State's niggers? Olmert's niggers?"

The officers said they were deeply offended by these remarks, but stressed that the ones making them were settler youths coming from outside of Hebron, and not the residents of the Jewish settlement or Kiryat Arba, who have treated them with respect.

Border Guard sources reported that racist remarks were also made against Druze soldiers. "We knew that this would happen so we instructed our officers in advance," said a source.

"We harshly condemn those extremists that bring a bad name to an entire public by using racial slurs against Border Guard fighters that spend night and day protecting residents of the West Bank.

"As part of the preparations for the mission the fighters were instructed to ignore such comments and carry out their mission with the utmost professionalism."

Zvi Zinger contributed to this report

Read the talkback comments here.
Posted by Orion at 5:14 PM