Remember it good, because the jewish media wants you to forget. Remember that this type of crime occurs in Turd World America EVERYDAY, and the jewish media suppresses it. Think of the many White Parents who grieve over their murdered children. Not only here, but all over the West. Think of the countless lives shattered and ruined, all for the lie of equality and diversity. All so some White fool can feel absolved of their "guilt".

If we do nothing, EVERYTHING our people built and created with their blood and tears, everything they suffered and sacrificed for, will be lost. Forever. Never to return. Are we to accept this?

We deserve what we tolerate. 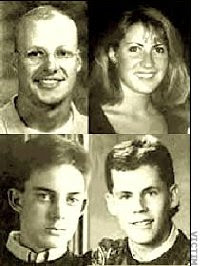 H. G. waited until she could no longer make out the truck's headlights. Then she got up to examine the other victims who lay exposed and face down in the snow.

Befort was next to her. She rolled his naked and battered body over. This was the man she loved, the man she knew loved her. He wanted to marry her but had not gotten the chance to slip the engagement ring on her finger.

Blood flowed from his head and eyes. Maybe he was still alive! Shivering and near-naked, H.G. removed her sweater, the only garment she had on, and tied it around his head to stop the bleeding.

She went to Heyka but soon realized there was not much she could do to help while she was there.

Seeing lights to the west a ways off, she thought the building that had them "was like some sort of farming type thing" and believed it might not have a phone. Looking toward the highway, she saw a home with Christmas lights on.

Like all things identified with this holiday season, bright and multi-colored Christmas lights represent joy and love and the spirit of giving.

For H. G., from whom so much had been taken loved ones, security, and dignity those lights meant comfort and help.

As she raced toward the Christmas lights, she saw car headlights and immediately dove into the frigid blanket of snow because she feared it might be the attackers. Every time she saw headlights, she flung herself to the ground, waited, then got back up to run toward those beckoning lights.

H.G. got to a fence and climbed over it. She crossed a highway that was almost empty due to the hour. Then she climbed over another fence and found herself on a dirt road that appeared to be behind a subdivision. She got to the back of a home, then raced around to the front door and repeatedly rang the doorbell and pounded on the door.

She had run a mile. As a child, H.G. was nicknamed "Toughy" by her playmates. She had lived up to that name.

The owners of the home, a man and a woman, peeked out a window to see a shivering, bleeding, naked woman on their porch.

They opened the door and let her inside, then bundled her up in blankets.

The man made the call. First he tried to tell the police emergency operator what H.G. had told him. Then he handed her the phone. Somehow H. G. was able to make herself speak clearly and calmly as she directed the police to the soccer field. She hoped that Befort might still be alive.

He was not. H.G.'s hopes were dashed and her heart broken when told that the man she loved and three people dear to her were found dead.

Police believe that while H.G. was making her way painfully through the snow, the attackers returned to the 12727 Birchwood Dr. house to steal more items. They also beat and stabbed H.G.'s muzzled dog Nikki to death.

Let this be a lesson to those who have eyes to see and ears to hear!

EVERY NIGGER A MURDERER! 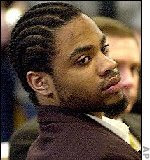 EVERY NIGGER A RAPIST! 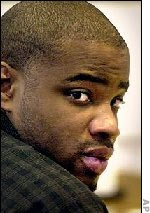 If you don't have this atitude, you might end up like those poor folks, whose indoctrination and Judeo-Xtian (I refuse to use the word Christ with such a false religion) lies allowed them to be robbed, sexually humiliated and murdered for sub-animal amusement.

But there is a solution. 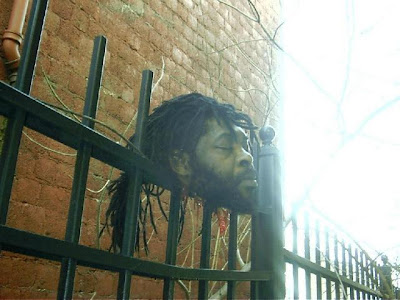 I LOVE the head on the fence! Talk about an effective crime watch sign!

That photo is truly shocking! Is that real or Photoshop? The only difference with me is that I feel ANYone who commits that type of crime against ANYone deserves the same fate.

Yes , God loves justice from a contrite and repentant heart -

" thine own wickedness shall correct thee .. "

While this may sound as gibberish to some , and most wont take the time to investigate ... justice is exactly what God requires . And will get .

What a glorious "role"
we have that so many consider unimportant or irrelevant .

And yes , blood soaked it may be but it's most always after many years of atrocities committed against our folk ... such as in yer article , when we finally say - ENUFF !

Funny, I do not remember hearing about this story, because the main stream media liars did NOT tell this story. Can you imagine is every black on white crime were given the same sensation as the RARE white on black is given? People can do the right thing if they are told the truth, so said Thomas Jefferson. Thank you for being one of the few sites that exposes the truth.

Anynon, this story never made it out of the local news media. It was up to the small number of blogs and alternative news sites to make it an issue. Can you imagine if two whites had done this? The president himself (as he did with the jasper murder) would be talking about it.

Lormarie, I don't know if it's photoshopped or not. I think the story was this guy was trying to break in to some business and was running from the cops when he landed on the fence.

I wonder what the Knoxville murder victims looked like. That would be pretty shocking too. But you can just check out the South Africa Sucks blog if you want to see the results of negro crime. I think Jeff has a link on his blog.

There ya go, Lormarie. You should see what they do to the women there. I believe a rape is committed in South Africa every so many seconds...it's an ungodly number. That's an issue a gynocentric feminist could latch on to!

Hey Wolf, that would be a very effective crime watch sign. I think we'll be seeing it soon.

the south africa web site is: www.zasucks.com It is horrific what niggers do to whites,