This is what the season is all about. The man that started it all was born poor in Mississippi and had been homeless and through a few jobs until he hit it big. Through it all, he never forgot where he came from or what it's like to be down and out. Like I've said before, Altruism is a White thing. 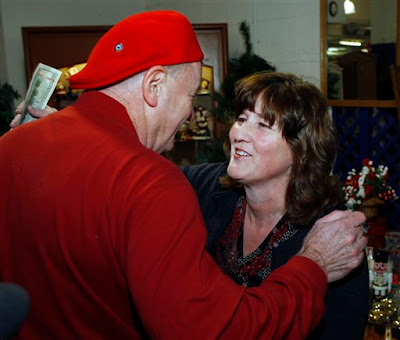 A Secret Santa put a smile on the face of a shopper at the St. Vincent DePaul thrift store after handing her a $100 bill, Friday, Dec. 5, 2008 in St. Louis. The Secret Santa from Kansas city and a St. Louis based protege searched the area for people who look like they could use a hand.(AP Photo/Tom Gannam)

The secret Santa was a protege of Kansas City's undercover gift giver, Larry Stewart, who died of cancer nearly two years ago. Stewart roamed city streets each December doling out $100 bills to anyone who looked like they might need a lift.

Before his death in January 2007, Stewart told a friend how much he would miss his 26 years of anonymous streetside giving, during which he gave away about $1.3 million. Stewart, from the city suburb of Lee's Summit, made millions in cable television and long-distance telephone service.

More on Larry Stewart Here.
Posted by Orion at 9:43 PM