Tactics Within A Revolutionary Strategy

This is how it's done, folks. The Great Satan has never had its supply lines disrupted in a meaningful way in all the wars it has fought and THE main reason for its successes. This is a BASIC military tactic that must be pursued in the coming insurgency. Military-Industrial complexes and vital supplies like Avionics, sensor manufacturers, Military and police electronics and Armaments MUST make the target list. 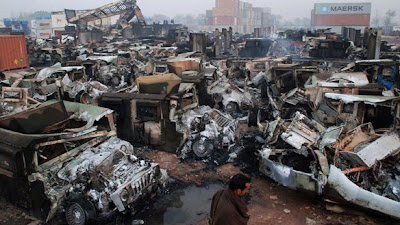 More than 160 US, NATO vehicles burned in Pakistan
By RIAZ KHAN – 2 hours ago

PESHAWAR, Pakistan (AP) — Militants (patriots) torched 160 vehicles, including dozens of Humvees destined for U.S. and (other jewish proxy) allied forces fighting (occupying) in Afghanistan, in the boldest attack so far on the critical military supply line through Pakistan.

The (jewish proxy) American military said Sunday's raid on two transport terminals near the beleaguered Pakistani city of Peshawar would have "minimal" (Bahaha) impact on anti-Taliban (anti-patriotic) operations set to expand with the arrival of thousands more troops next year.

However, the attack feeds concern that insurgents are trying to choke the route through the famed Khyber Pass, which carries up to 70 percent of the supplies for Western forces in landlocked Afghanistan, and drive up the cost of the war.

It also dents faith in Pakistani authorities already under pressure from India and the U.S. to act on suspicion that the deadly terror attacks in Mumbai were orchestrated by Islamic extremists (patriots) based in Pakistan.

The owner of one of the terminals hit Sunday denied government claims that security was boosted after an ambush last month in which bearded militants made off with a Humvee and later paraded it in triumph before journalists.

"We don't feel safe here at all," Kifayatullah Khan told The Associated Press. He predicted that most of his night watchmen would quit their jobs out of fear. "It is almost impossible for us to continue with this business." (Excellent. The key here is to keep the pressure on and make his words come true.)

The attack reduced a section of the walled Portward Logistic Terminal to a smoldering junkyard.

Khan said armed men flattened the gate before dawn with a rocket-propelled grenade, fatally shot a guard and set fire to 106 vehicles, including about 70 Humvees.

Humvees are thought to cost about $100,000 each, though the price varies widely depending on armor and other equipment, meaning Sunday's losses may exceed $10 million.

An Associated Press reporter who visited the depot saw six rows of destroyed Humvees and military trucks packed close together, some on flatbed trailers, all of them gutted and twisted by the flames.

The attackers fled after a brief exchange of fire with police, who arrived about 40 minutes later, he said.

Nine other guards who stood helplessly aside during the attack put the number of assailants at 300, Khan said. Police official Kashif Alam said there were only 30.

At the nearby Faisal depot, manager Shah Iran said 60 vehicles destined for Afghanistan as well as three Pakistani trucks were also burned.

The attacks were the latest in a series highlighting the vulnerability of the supply route to the spreading power of the Taliban in the border region, which is also considered a likely hiding place for al-Qaida leader Osama bin Laden.

Vast quantities of supplies pass through Pakistan after being unloaded from ships at the Arabian sea port of Karachi. Some is routed through Quetta toward the Afghan city of Kandahar, but most flows through the Khyber Pass toward Kabul and the huge U.S. air base at Bagram. (Karachi should also be an area of operations, as it's the point of entry)

The U.S. military in Afghanistan said in a statement that an unspecified number of its containers were destroyed but that their loss would have "minimal effect on our operations." (Haha, yeah yeah, we know, we know.)

"It's militarily insignificant," U.S. spokeswoman Lt. Col. Rumi Nielsen-Green said. "You can't imagine the volume of supplies that come through there and elsewhere and other ways." (WTF is an Rumi Nielsen-Green?! Just another lying bitch)

Still, NATO is seeking an alternative route through Central Asia, which it acknowledges is more expensive.

Pakistan halted traffic through the Khyber Pass for several days in November while it arranged for troops to guard the slow-moving convoys.

Shahedullah Baig, a spokesman for the Interior Ministry in Islamabad, insisted Sunday that the extra security covered the terminals.

"They are fully protected, but in this kind of situation such incidents happen," Baig said.

However, Khan, the depot manager, said that was untrue, and that there were only a handful of lightly armed police at the targeted terminals on Sunday afternoon.

Peshawar has seen a surge in violence in recent weeks, including the slaying of an American working on a U.S.-funded aid project. On Saturday, a car bomb detonated in a busy market area of the city, killing 29 people and injuring 100 more.

Mehmood Shah, a former chief of security in Pakistan's tribal badlands now working as a consultant, said militants appeared to have moved into the Khyber region from both sides of the border in recent months to put pressure on the supply route. (Mehmood should become one with the fishes dood.)


The terminals, like the route itself, could not be adequately protected by private security guards, he said.

Associated Press writers Zarar Khan and Stephen Graham in Islamabad and Heidi Vogt and Jason Straziuso in Kabul contributed to this report.

http://www.google.com/hostednews/ap/article/ALeqM5hkiMxbHNH0BqgpWA2ZG6VD6wVTmAD94U15V80
Posted by Orion at 2:20 PM

That's 160 less vehicles ZOG can transfer when the civil war starts here. God Bless the Taliban Man! Now, thin the ranks of the future Sheriff deputies, SWAT/ATF/FBI/HS GOONS and so much the better for us.